A Colonial Collection Transformed into a Local Museum

A Colonial Collection Transformed into a Local Museum

Celebrating 75 Years of Making the Past More Meaningful to All Americans  2015 marks AASLH’s 75th Anniversary Year. For the occasion, AASLH has created a blog series for members to share their unique history and memories. Contributions were based around AASLH’s founding year, 1940, but members also shared other wonderful moments in local history.  The celebration is not just about AASLH’s history, but about the collective history of AASLH members, both individual and institutional, and the work we do for the field of state and local history.

The Alice T. Miner Museum is a colonial revival house museum in Chazy, a town in New York’s Clinton County. Opened in 1924 in a reconstructed 19th-century stone building, the museum houses Alice Miner’s collection of furniture, textiles, ceramics, books, manuscripts, and decorative arts. Though she called it her “Colonial Collection,” and the museum’s focus is 18th and early 19th century American objects. Alice also acquired a wide variety of items from all over the world—Babylonian clay tablets, African baskets, Peruvian textiles, and much more.

Alice’s husband, William H. Miner, had spent part of his childhood living with his aunt and uncle on the Miner family farm in Chazy. In 1903, William and Alice decided to make Chazy their second home, and over the next decade turned the farm into a model agricultural institution they called Heart’s Delight Farm. Around this time, Alice also began collecting the ceramics and glass that would form the nucleus of the museum. In the early 1920s, the Miners began work on the museum, remodeling a ca. 1824 stone building in the center of Chazy village to reflect Alice’s conception of a “colonial home.”

In 1940, the Colonial Collection was in its second decade but still one of the few museums in the North Country. In Plattsburgh, 15 miles to the south, there was the Kent-Delord House, a restored early-19th century home that had played an important role in the Battle of Plattsburgh. A new public library opened in Plattsburgh in early 1940, and there was talk of turning an unused room into a small local history museum, but the Clinton County Historical Association would not be founded until five years later. On the other side of Lake Champlain, Electra Havemeyer Webb was still seven years away from opening the Shelburne Museum.

The Colonial Home thus played an important role in Chazy and the surrounding area. It was one of the few institutions in the region where people could see historical artifacts, and it had a particularly close relationship with the Chazy Central Rural School, which had been established by the Miners in 1916. Students from the school visited the museum as part of their lessons in local history, and they were even sometimes allowed to borrow items from the collection to enhance the historical authenticity of school plays. 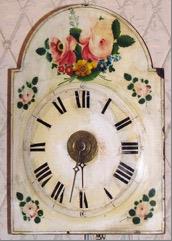 The museum also frequently served as a meeting place for local organizations, particularly women’s clubs. The Plattsburgh Daily Press reported in April 1940 that the Saranac Chapter of the Daughters of the American Revolution had held their monthly meeting at the Colonial Home, during which one of the members presented a paper on “Time Devices and Old Clocks.” As the article noted, “The subject was particularly appropriate as there are many old clocks in the museum, mantel clocks, grandfather clocks, and even a wag-on-the-wall.”

Later that spring, the Chazy Garden Club met at the museum to plan their annual flower show, and in the summer, Mrs. Frederic Nichols gave an “informal talk and exhibition of Antique Glass” at the museum. This event was given under the auspices of the Presbyterian Ladies Aid Society, an organization to which Alice also belonged. Although Charles and Josephine Rea were employed as curators of the museum, and in fact lived on site, Alice was very closely involved in the day-to-day activities of the museum, and would continue to be until her death in 1950.