A Meaningful Conversation on Local History

A Meaningful Conversation on Local History

On Wednesday, May 27, Middle Tennessee State University in Murfreesboro, TN, hosted an after-hours conversation for the history community with noted author and local historian Carol Kammen. AASLH’s Chief Operating Officer Bob Beatty moderated the conversation, and I was lucky enough to get to sit in on the program. Carol is a visiting public historian leading a three-week Maymester course for MTSU history graduate students. 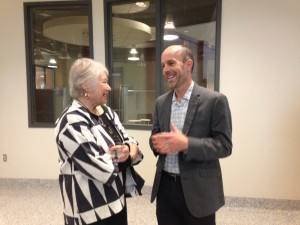 One project in her town has created lasting effects. Based on a Chinese example, Carol sent out a request for everyone in the community of Ithaca to send a story about one day in their life. She picked a single date –May 17, 1988. The community responded in droves, with hundreds of stories pouring in for the project. The result was a model for trying to tell the story of a whole community, person by person, which has truly filled a gap in the historical record of the town of Ithaca in 1988. Carol remarked how moved many of the people were just to be asked to share their story. She challenged those in attendance to think about who they could ask to leave a record of history on the local level whose story might not otherwise be told.

Local history is often insular, but should not be. How many times do we as historians get caught up on our research and telling the story we think is important to our community? Carol pointed out how much more might be added to our understanding of the past if we reached out to local historians in neighboring towns and counties to see how our research can tie into what was going on in their communities during the time. What are the common stories that can help connect us and add vital context?

Finally, she encouraged us to not shy away from difficult stories. She said, “Local history should ask moral questions.” It is important that local historians address difficult topics in a meaningful way.