A New Level of Engagement

A New Level of Engagement

In 2013, I took the leap and applied to the Developing Leaders @SHA (Seminar for Historical Administration), recognizing that after fifteen years in the field it was time to radically shake things up in my approach to our work. Among the many wonderful things that resulted from my SHA experience, the lifelong friendships made during our three weeks spent in the classroom laboratory were an unexpected benefit. Parting at the conclusion of SHA was an emotional affair, with hugs and promises to make an effort to see one another again as we all scattered back to our lives that spread out across the country.

When the AASLH program committee met in Louisville, KY, last month, I had read all of the session proposals and familiarized myself with the responsibilities involved in the committee’s job. However, as three of my SHA classmates entered the meeting one by one, it was as if no time had passed at all. I was thrilled to hear about their various jobs and how they had changed as a result of their SHA graduation, fascinated by the variety of projects they were each involved in, and honestly excited to spend time with them talking about the parts of SHA that had ultimately proven to be most useful and the most memorable over time. 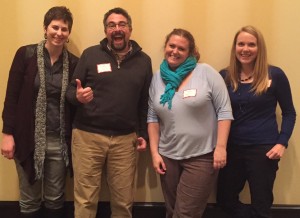 As we sat in the hotel bar that evening discussing everything from outsourcing exhibit construction to The Walking Dead, I was reminded of how grateful I was to have taken the step to apply for SHA, which has led to an increased awareness of the expanse of the history field and the many wonderful people doing great work around the country.

I have continued to take on a more active role with the AASLH organization in an effort to build on this energy, and look forward to seeing not only my three SHA classmates, but so many other colleagues and friends when we gather for the annual meeting in September. Want to shake up your energy? All you have to do is reach out and engage. Attend the annual meeting, apply for SHA, or attend an onsite AASLH workshop. Just get involved and reap the benefits!

Eloise Batic is the Director, Exhibitions Research and Development at the Indiana Historical Society and a 2013 SHA graduate.