A Night at the Museum: Public-Private Collaboration Done Right

A Night at the Museum: Public-Private Collaboration Done Right

I was thrilled to attend the opening of American Enterprise, the new business exhibit that opened at the Smithsonian’s National Museum of American History on July 1. The exhibit is fantastic, and I’m excited that John Deere is a program sponsor. The opportunity to collaborate with the most-visited history museum in the world is not something that should be passed up. 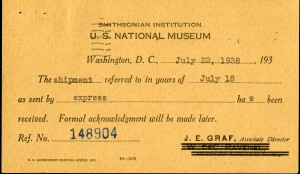 Copy of the gift acknowledgement from the Smithsonian to John Deere in 1938.

The exhibit is about collaboration. In this case, it’s the reinvigoration of a long relationship between John Deere and the Smithsonian that  dates back to at least 1938, the year we donated the oldest existing John Deere plow, one of two Deere built in 1838 (he built one in 1837) to what was then called the U.S. National Museum.

Later, the museum added John Deere tractors to its collection; a Waterloo Boy and a model “D” to be exact. In 1955, the Smithsonian gave back. Curator Edward Kendall published John Deere’s Steel Plow, the most exhaustive study of the development of Deere’s first decade of plow making, and based on extensive metallurgical testing and historical research. The result was an objective scientific and historical analysis that brought the steel plow back to life. Based on that work, the Smithsonian built a new plow to the same specifications, which is now in the collection of the John Deere Archives. 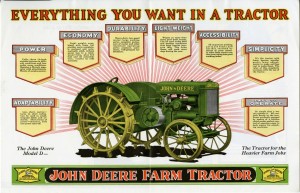 Advertisement for a model “D” tractor, circa 1924.

Mutually beneficial relationships that educate and engage the public are what private-public partnerships should be all about. For John Deere, there are several exciting outcomes, including raising awareness of the Agricultural Innovation & Heritage Archive, an online program to collect stories and encourage the donation of agricultural artifacts to the Smithsonian, and participation in a number of innovative programs, including Ask a Farmer, Food History Weekend, and other agriculture education initiatives.

Whether you are in Washington, D.C. or just surfing online, be sure to visit American Enterprise.

More information about John Deere items at the Smithsonian is available from the links below: