In a perfect world, museum professionals could magically acquire all of the objects they desire for their exhibitions. Every now and then, the National Museum of American History reaches out to the public in the hopes of fulfilling a wish list of objects we hope to discover for exhibition purposes. It isn’t often that we find everything we want. But a recent encounter with some dedicated employees, past and present, of the 3M Company made our magical aspiration a reality and helped us to showcase the story of one of the company’s greatest innovations.

We sought objects for the new American Enterprise exhibition, which opens July 1. American Enterprise is not a business history exhibition in the traditional sense, but a display about people and the everyday activities that influence the creation or dissolution of a business. Within its 8,000-square-foot space, visitors will not only glimpse into the lives of famous inventors, witnessing the successes and failures that have fueled American innovation, but they’ll also see objects that represent dynamic interplay between consumers and producers.

Prior to the last year, the museum had a respectable collection of 3M artifacts, but few that addressed the company’s pioneering history and corporate culture of innovation. We didn’t have the objects that we needed to highlight the story of how sandpaper morphed into the ubiquitous scotch tape we all use today. It is a rather fascinating tale, with regard to the inventive chemical components involved, but what captivated us most was the corporate environment that fostered the transition from sandpaper to tape.

In our attempts to acquire objects for this display, we reached out to employees at 3M. They responded promptly and graciously, going beyond our expectations. They provided not only a beautiful PowerPoint presentation of objects from their archives, but they also graciously extended the museum’s request to former employees. 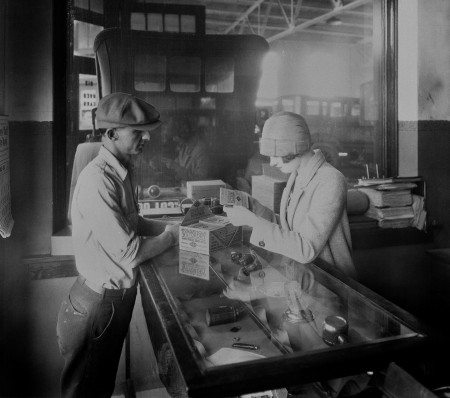 We acquired several images, such as this one of a woman purchasing sandpaper packaged and sold at auto paint shops and hardware stores. This photograph illustrates how 3M moved its sales from the industrial market (automobile manufacturers) to the consumer market. We also received many objects, like this early box of masking tape. 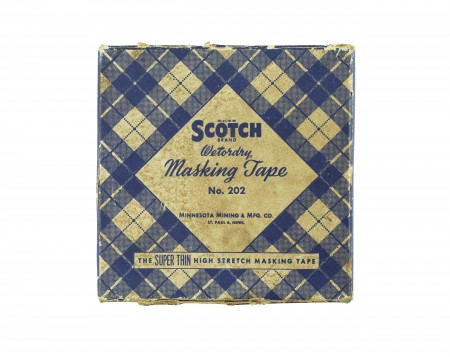 An employee in the company’s abrasives department reported that the Wetordry brand was used with masking tape when it was first marketed so that consumers could identify it with the Wetordry sandpaper product. This was the perfect combination of objects to tell the tale of the innovative transition from sandpaper to tape, a story we wanted to highlight in American Enterprise.

Our biggest challenge was in determining which objects to exhibit. It’s a big story to tell in a case that’s about the size of a small TV box (one we all wished was larger to accommodate more amazing finds and graphics). The entire process—from request through selection to acquisition—was unusual in the most pleasantly surprising way. We had such remarkable access to corporate history, and we also surpassed all expectations in satisfying our wish list. This was a true rarity for the museum world.

Katharine Klein is a Project Assistant for the American Enterprise exhibition at the National Museum of American History, Smithsonian Institution.