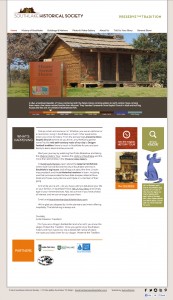 Southlake Historical Society, an all-volunteer local historical society in Texas designed our website, www.southlakehistory.org, in 2012 and 2013 with the goal of presenting our city’s history in a comprehensive, user-friendly way 24/7 to all ages in our highly mobile community in the Dallas-Fort Worth area.

We were proud of our website so decided to submit a nomination to the AASLH for an Award of Merit in the multimedia category.  At the least, we hoped for some valuable feedback.

We downloaded the forms, and it wasn’t difficult to fill them out.  In fact, it made us feel good to reflect on our efforts and put them in writing. Our state team leader, Daniel Schlegel Jr. of the Scurry County Museum in Snyder, was helpful, as was Bratten Thomason of the Texas Historical Commission, who helped us understand who we should ask for critical reviews and what the reviews should include.  She told us the letters should not just say “rah, rah, this project is great.”  Instead, the reviewers needed to address the scholarship, success, challenges and impact of our project and organization.

A few months later Daniel Schlegel called to say we had been given the Albert B. Corey Award, a great honor for volunteer institutions.  In September, we received the award at the awards banquet at the AASLH convention in Birmingham, Al.  That was quite a thrill!  But also thrilling was seeing the depth and variety of the other projects given awards.  It was a proud night for people who had worked so hard to build an understanding and awareness of history.

Winning the Corey Award has benefitted our organization in many ways.

Information about the award was put on the City of Southlake’s website, and several local newspapers wrote about the award.  Southlake Mayor John Terrell presented the SHS with a proclamation commending us and declaring a “Southlake Historical Society Day,” which garnered more media attention.  The presentation, made at a council meeting, was broadcast on a local cable channel and is available online.  As a result, our website analytics showed an increased number of people visited our site.

Personally, we are appreciative of the AASLH’s recognition of our hard work and our sincere desire to make our city’s history relevant and accessible.

We encourage all organizations with projects they’re proud of to apply for an award.  We especially encourage groups like ours—local, all-volunteer historical societies—to apply.  The effort is well worth it.