On January 17, I started my day with a group of people—most of whom I have never met—to decide which proposals out of 126 would be 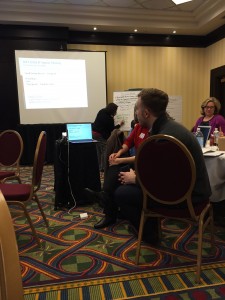 accepted as sessions, workshops, and labs at the 2015 AASLH Annual Meeting in Louisville, Kentucky.

It was my first time being on the program committee and I was a little apprehensive about what was going to happen that day. I had been asked to be a small group leader by Bob Beatty and Kyle McCoy and it was a little intimidating at first, but I had amazing group members who not only thoughtfully examined every proposal assigned to us, but took the time to really discuss the ideas in each one–so much so that we almost ran out of time in the morning session.

As someone who has presented twice at an AASLH meeting, it was interesting to see this behind the scenes thoughtfulness and at some points, debate. I thought it was really cool to know that our peers are the ones who make these decisions. I know for a few of my peers in the room, there was a bit of excitement while they waited to find out if their proposals were going to be accepted or denied—like many of you who were waiting to hear if you’ve been accepted.

In the afternoon it was the same thing, we would have about 5-10 proposals to look through and decide how many would make the cut. Let me tell you, these determinations aren’t easy by any means. It’s difficult knowing that someone’s proposal is going to be turned down for this year, but what was great was knowing that we could ask presenters to resubmit for the next year. Sometimes there were sessions that just needed a little extra “oomph” to take it to the next step and it was encouraging to see that every submission was subject to the same intense review and thoughtfulness.

The highlight for me was after all of the work was done, going out and enjoying an evening in Louisville with the folks who are working hard to make this annual meeting possible. The program committee strives to make each meeting better than the last and I could see evidence in that in the eight hours spent choosing the best of the best, and coming up with helpful critiques of those we wish to see again, better, stronger, and ready to rock our socks. I could not ask for a better first time experience.

For more information about the 2015 AASLH Annual Meeting, visit http://about.aaslh.org/conference/.

Nicole Moore is a historic consultant and blogger for www.interpretingslavelife.com.