Adding Branches to Our Family Tree

Adding Branches to Our Family Tree

As the corporate history museum for American Airlines, the CR Smith Museum holds a significant collection of artifacts and archives that help us interpret the history of commercial aviation for the general public as well as support corporate and outside research requests. The formation of American Airlines began in the late 1920’s and early 1930’s, when airlines were primarily small operations that depended on government issued airmail contracts for almost all of their revenues. 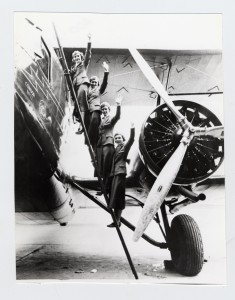 In its infancy, commercial aviation was a dicey financial endeavor. Prior to the formation of American Airlines there was the Aviation Corporation, or Avco, an early effort by investors to collect smaller regional airlines and combine these operations into a coordinated network. Avco sought to expand the range of operations and to improve the overall fiscal performance. By 1929, Avco holdings included several airlines such as Universal, Colonial, Southern and Robertson among others. In addition to the airlines, the company had accumulated several other aviation enterprises including flight schools, aircraft and engine manufacturers, manufacturers of aircraft accessories and even two airfields on Long Island. But the larger company needed to centralize the leadership over all the small components in order to create a more profitable and efficient organizational structure.

In late 1929 officers of AVCO persuaded the sixty-five colleagues on the various directing boards to consolidate all of the airline holdings into one new subsidiary corporation. In January 1930 American Airways was incorporated and by 1934 was reorganized into American Airlines. CR Smith, who had established his reputation directing the operations of American Airways’ Southern division, was promoted to the position of president.

Now fast-forward more than 80 years. On December 9, 2013, American Airlines exited bankruptcy and formally merged with US Airways. Both of these airlines bring their own histories and their own legacies of past airlines acquired over the decades through mergers and acquisitions. Again, for reasons of efficiencies and economy, very different corporations merge their operations and pursue a more competitive position in a highly competitive field.

Again, as in the past, distinct administrative and airport operations need to be married together, fleets and flight routes must be integrated. Long established departments will take direction from new leaders, dozens of teams and thousands of individuals will work to understand a new corporate culture and then adapt accordingly.

As the corporate museum for what is now the world’s largest airline, the CR Smith Museum looks towards merging our corporate histories. In following our mission of telling the stories of a much larger heritage, our meetings and conversations invariably raise many questions, but the answers are yet to come.

It is like we have taken part in a giant corporate wedding and now our family tree just added a great number of branches.