U.S. 250, Career Diversity, and Other Takeaways from the AHA Annual Meeting

U.S. 250, Career Diversity, and Other Takeaways from the AHA Annual Meeting 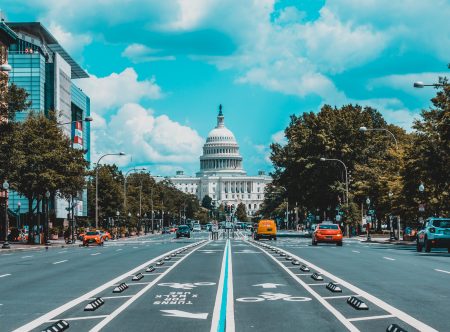 Last week, I had the opportunity to attend the American Historical Association’s annual meeting as thousands of historians braved the bitterly cold temperatures and biting winds to convene in Washington, D.C. This year, the meeting helped me step back and think broadly about the wide variety of ways people can “do” history and the opportunities for professionals engaged in diverse ways with the historical enterprise to improve our communication and cooperation.

The main reason I went was to attend the meeting of the National Coalition for History’s Policy Board to discuss ongoing planning for the nation’s 250th (add ‘semiquincentennial’ to your spell check now, folks) anniversary. The Coalition serves as a central advocacy shop for history organizations, and its policy board brings together the leaders of some of the nation’s most prominent history associations and societies, including the American Historical Association, Organization of American Historians, National Council on Public History, AASLH, and several others. In addition to discussing a range of topics affecting history organizations nationwide, we spent time thinking big as we all continue to prepare for the U.S. 250th.

Over the past several months, AASLH has begun some preliminary work in planning for the 250th, bringing together a task force and advisory committee that includes representatives from institutions around the country. As multiple national semiquincentennial commemorative initiatives have emerged over the past several months, one of the aims of the AASLH task force and advisory committees is to think broadly about how the field can approach this anniversary, developing a framework that can help align the activities of the many individuals and institutions involved in various commemoration efforts.

Discussing the 250th with this coalition made clear for me the significant opportunities available for collaboration between associations and institutions working in various sectors of the history community, but particularly between the public and academic history worlds. Just as history associations and societies representing diverse professional and scholarly interests mutually support the National Coalition for History to advocate for the benefit of the history field as a whole, so too does the 250th anniversary represent a unique opportunity for collaboration across the lines that artificially divide the history community. 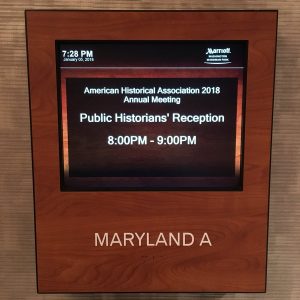 Beyond the U.S. 250, this Annual Meeting helped me recognize the many opportunities out there for public and academic historians to collaborate more productively. Having attended several AHA meetings in the past— in my former life as an academic— I was struck this year by what seemed like a stronger and more widespread focus on how historians and scholars across the field can more effectively reach the public—from improving communications through traditional and digital media to the AHA’s increasing emphasis on career diversity.

In all, the meeting inspired me to think anew about the ways history professionals—and the associations representing its various sectors—might better collaborate to better serve both the public and the field. After a weekend in which lots of people were thinking creatively and ambitiously about the future of the past, I am re-energized to continue developing these ideas in the months and years ahead.