Dichtl has served for the last nine years as Executive Director of the National Council on Public History, and is an Adjunct Associate Professor in the Department of History at Indiana University Purdue University Indianapolis. Beatty has been director and then Vice President for Programs at AASLH since 2007. He currently serves as interim President & CEO until May 1, 2015.

“After a national search, I am extremely pleased that John Dichtl has agreed to serve as the new leader of AASLH as President & CEO. John’s wealth of knowledge and experience has already made him a key leader in the history field,” said Dr. Julie Rose, AASLH Council Chair and Director, West Baton Rouge Museum. “There has been no more exciting time for AASLH and the history field than now and our association is uniquely poised to take advantage of it. With John as our President & CEO and Bob Beatty as COO, our association has in place a strong and skilled leadership team.”

“AASLH provides the best in leadership, support, and advocacy for the field of state and local history,” said Dichtl. “As President & CEO, I am excited to build on this foundation and work with council, staff, and membership to build new relationships with academic historians and organizations, tap into the energy of avocational historians, and find ways for AASLH and its members to make more global connections.” 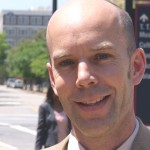 About John Dichtl:
John Dichtl holds an MA and PhD in United States history from Indiana University and a BA in history from Carleton College. For the last nine years he has served as Executive Director of the National Council on Public History and was  Deputy Director of the Organization of American Historians from 2000-2005. Prior to the Indiana-based OAH and NCPH, Dichtl had two years of direct Capitol Hill experience as a staff member of the U.S. Senate Judiciary Committee.

His teaching at IUPUI was recognized with multiple Favorite Professor Awards, he has served on graduate thesis committees for IUPUI history students, and he has been involved with the National History Day program.  His recent public history projects include assisting with the Early African American Settlement Heritage Initiative at the Indiana Historical Society, and the Indy Historical Smart Phone App Project.

Dichtl is the author of Frontiers of Faith: Bringing Catholicism to the West in the Early Republic (University Press of Kentucky, 2008). At NCPH, Dichtl has edited Public History News and helped edit the blog [email protected].  He has written encyclopedia entries, book and exhibition reviews, and a variety of articles and reports in history publications.

About the American Association for State and Local History (AASLH):
AASLH has provided leadership and support for its members who preserve and interpret state and local history in order to make the past more meaningful to all Americans since 1940. AASLH is the only national association dedicated to the uniqueness of history organizations and the specific challenges of collecting, preserving, and interpreting history. Membership includes over 6,000 individuals and institutions from rural communities, urban sites, small historical societies, and large history centers across the United States. For this diverse membership, AASLH offers programs and services that meet members’ needs while progressively advancing the goals and standards of the field of state and local history. From its headquarters in Nashville, Tennessee, AASLH is proud to provide a home for those who work and volunteer in the field of state and local history. For more information, visit aaslh.org.