Anticipating the Future Of Religious History

Anticipating the Future Of Religious History

We can’t predict the future. Yet as historians thinking critically about the relevance of history in our communities, we can strive to anticipate, or imagine, the future to some degree. Such efforts often influence our collecting, programming, and quite possibly the entire direction of our organization.

A few intriguing stories about our current religious world led me to wonder if I could anticipate directions in which our collective religious history might go. What is happening today that might change our perspective as we move beyond the horizon of time? As a fun exercise, here are three inter-related anticipations, rather than predictions, of what future elements of American religious history might look like, based on current trends in our country (and world) today:

It may not be “organized” – According to the findings of the Pew Research Center’s 2014 Religious Landscape Study, Americans are generally becoming less religious, but more spiritual. This coincides with the growth of spiritual “nones” – people, especially members of the millennial generation, who don’t identify with any organized religious group. However, it doesn’t mean that they would qualify as an atheist or agnostic…they just operate outside of what is often considered “organized religion.” What, if any, is the outlet for this spirituality, and what does this mean as we try to tell this story going forward? Will this trend continue and reshape the religious landscape as generational replacement continues to intensify in the coming years? 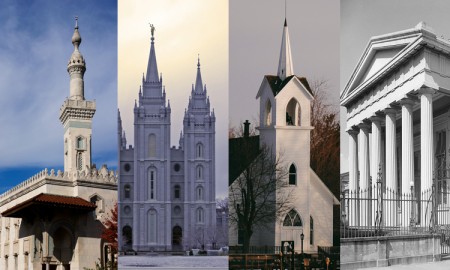 It could be unexpectedly organized – This story from CNN shares the spiritual journey of one man from Catholicism to atheism, who, in his desire to connect to a community and a cause, has started a “secular church.” Secular Together, which began as an experiment of the Triangle Freethought Society in North Carolina, unexpectedly creates the same communal rituals for bonding that might be found in any religious church, like group singing or an instructional/inspirational message. It simply lacks the religion. For this group, these Sunday meetings are a place to “have fun, get to know each other, learn some things about how to live a better life, be inspired and get our energy back for the week.” How far will this secular group continue to organize, and will it unexpectedly follow the same paths of other religious groups? Would it possibly begin to enter the mainstream and push for formal recognition like other movements have done in Europe?

It might defy cultural and ethnic divides – This story from NPR explores the complex stories of Latino Muslims in the United States. I am probably influenced by cultural stereotypes more than I realize, so I was surprised to learn that Latinos are the fastest growing group in Islam in the United States. As our country grows increasingly diverse, expected norms often don’t quite hold true. While these trends aren’t solely the prerogative of Millennials, the largest and most diverse generation in our country’s history may continue to foster more unexpected bridging between cultural, ethnic and religious divides. Where does reality clash with expectations in your community? Where might these divides be breaking down?

What do you think? Are there other trends out there to keep an eye on? Can we see these trends on the continuum of past, present and future of our religious history? Are they irrelevant and inconsequential in the big picture of things? Or are they meaningful enough that they should influence our collecting, programming and all of our attempts to make the past meaningful to our communities today?