On November 16, award-winning chef and culinary historian Walter Staib and his crew arrived at the James K. Polk Home in Columbia, Tennessee, to film an episode of the Emmy Award winning television show A Taste of History. This unique series explores American history through food and cooking, and connects viewers with the past through authentic historical recipes and locations. 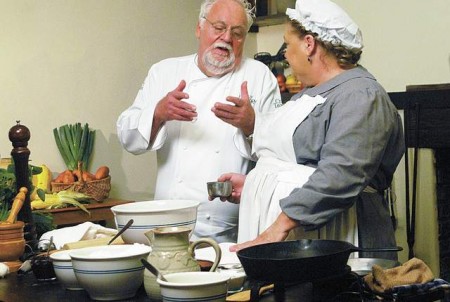 At the invitation of Polk Association President Elect Beth Gilbert, the Taste of History film crew decided to examine early American cuisine in the home of the eleventh president. With the help of Susie Jackson, Polk’s hearth demonstration cook, Chef Staib prepared a nineteenth-century meal in the home’s kitchen and discussed the history of the home and the Polk family for the show. Director John Holtzapple and Curator Tom Price also contributed their expertise and historical context to the episode. Local blacksmith Anthony Martin of Red Tail Forge Works outfitted the kitchen with historically-accurate reproduction cooking implements.

The episode will air in season seven in 2016 on PBS, so stay tuned!