My contribution is related to the somewhat unexpected success of a Web 2.0 initiative in a Canadian Museum of Civilization exhibition. I will first speak about the exhibition and its Web 2.0 component, which was recognized at the 2012 MUSE Awards of the American Association of Museums (AAM), winning the Silver medal in the “Digital Communities” category. I will naturally speak about the numerous contributions we received from visitors and draw some conclusions.

First, There was the Exhibition

God(s) A User’s Guide explores the relationships between human beings and their god(s). The content is developed through 11 themes that focus on the gestures, and the objects and places of worship, as well as the beliefs associated with various religious practices: Point of Reference, Divinities, Passages, Worship, Places, Body, Cycles, Beyond, Intercessors, Conflicts and Coexistence. 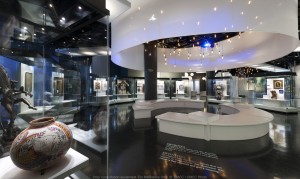 The exhibition took place at the Canadian Museum of Civilization in Gatineau from December 2, 2011 to September 3, 2012. It was based on a concept developed by the Musée de l’Europe and Tempora SA (Bruxelles), and was adapted in collaboration with the Musée de la civilisation in Quebec City.

The inclusion of a social media component offered visitors the possibility of adding their voice to the exhibition, either during their visit, or from their own home or portable device. The microsite heading “Express Yourself” registered comments that could be easily communicated, anytime, anywhere.

The importance of finding the right question or questions …

The decision to launch a Web 2.0 initiative (one of the first to be held both intra- and extra-muros) on such a delicate subject followed a lengthy reflection by the Museum. In the spring of 2010, well before the exhibition opened at the Canadian Museum of Civilization, we attended the Museum and the Web congress in Denver and took part in a workshop offered by Nina Simon, author of Participatory Museum and the blog Museum 2.0. We submitted the religious theme to participants to help identify questions that would stimulate participation on this delicate subject. Not always easy to find the right wording… The questions tended to focus on tolerance or its limits, a subject often featured in headlines and one on which there has been a lot of consultation and exchanges. We didn’t keep any of the proposed questions, but the workshop provided the characteristics of a good question (see Nina Simon. Post Design Techniques for Developing Questions for Visitor Participation – Tuesday, April 28, 2009 http://museumtwo.blogspot.ca/2009/04/design-techniques-for-developing.html). Above all, in view of our subject and of the comparative approach we had chosen to present the exhibition’s content, we wanted to encourage communication from a personal, reflective and introspective point of view, rather than commentaries on other people’s beliefs. All questions and commentaries can be consulted on line at http://www.civilization.ca/gods/ under the heading Have your say.

Contributions consisted of short texts with a maximum of 400 characters. The number of responses left by exhibition visitors (over 3000) far exceeded the number of responses received on the Web (30 responses for the most popular questions). Note that the microsite was very active compared to the microsites of other recent Museum exhibitions, with about twice as many pages being consulted. The subject is of interest!

A very popular question: What do you believe will happen to you after you die?

This question is the only one from the microsite that is also featured in the exhibition itself. It is located near the “Beyond” section, which deals with concepts of life after death in various religions. It is also a question that can be answered by young and old, believers and non-believers, people who practise or do not practise a particular religion. Our intuition proved to be right and was rapidly confirmed by the number of contributions.

Visitors’ contributions echo the video testimonies included in this module by seven persons of various faiths, each one representing one of Canada’s important religious practises, and one atheist. 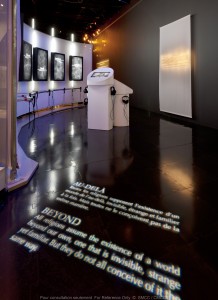 Figure 2 – The Beyond Section

We added this last testimony to avoid transmitting the idea that a full and happy life could not be achieved outside a religious practise.

Visitors’ contributions were presented in the centre of what we called the “formal” testimonies, which were recorded professionally. The two components “Contributions” and “Consultation of commentaries” were separated, on one hand to favour the availability of computers, but mostly out of respect for the reflective atmosphere of the module. Thus the “Contribution of commentaries” was located close to the module itself.

Following moderation, texts were posted on both the Web and the exhibition’s consultation stations.

Written commentaries in English and in French

Here are a few examples:

I have been told that our existence on earth is one of many in an endless journey. Our purpose here is to learn the laws of what we call mamawi-nohtawinan (Creator). I believe that once our time is done here we move on to another existence in another form of being.

There are valleys of existence. This world challenges us, in so many ways. As a result we either grow or decline in spiritual strength. Such strength is transmitted to the next levels of existence.  There are multiple heavens. We continue to grow, develop, evolve. The more we evolve the closer we become to God.

I’m really not sure what I believe will happen to you after you die. I like to belive in heaven sometimes, other times that you will be reborn. I even think that nothing will happen to you, you will just cease to exist. I think it makes it more interesting, believing more than one thing and also not really knowing. Isn’t death the last great adventure? Isn’t the reason why because you don’t know what’s going to happen?

The commentaries allowed members of religions other than those represented by the “formal” testimonies to express themselves. The contributions also indicated that the perception of a world beyond is subject to the multiple influences of various religions.

The video contributions were presented only in the exhibition. Visitors’ video recordings were not systematically posted on the website, for lack of resources at the time the website was designed.  There were many such recordings.

Video commentaries in English and French

The moderation of videos (and written commentaries) eliminated many contributions. Videos by persons under 18 years of age had to show the presence of an adult, thus allowing for some videos by children. Needless to say, many children and teenagers took advantage of the opportunity to make silly jokes. Some of these showed imagination, but most of them did not. We received one or two comments of a heinous or disrespectful nature. Some technical problems at the beginning of this initiative – a novelty for the Museum – led to the elimination of several contributions due to the poor quality of the sound or image. Lighting and the sound environment are critical to the quality of recordings.

Many testimonies invited reflection, were spontaneous or profound

I took a particular interest in the videos, which I often found to be revealing, moving and authentic.

Role of the moderator

Moderating so many comments takes time, about three hours a week during the entire duration of the exhibition. The reading task was shared with my colleague Julie Dutton, a marketing officer at the Museum. Her help was greatly appreciated, not only in terms of saving time, but also because the confidences of hope expressed by people were very moving.  Life is made of hope and of a certain death. What happens after? A mystery for some, a certainty for others. The moderating task nourished our thinking on this existential question on a daily basis.

What did visitors contribute to the exhibition?

First and foremost, visitors confirmed that there is a wide variety of viewpoints on death. They transmitted a sometimes surprising combination of various aspects coming from very different religions. Far from creating an impression of incoherence, the testimonies enriched the exhibition from a variety of viewpoints. The didactic message of an exhibition requires a clear purpose that tends to hide the many ways in which ordinary people live their religion. The Web 2.0 initiative corrected that impression.