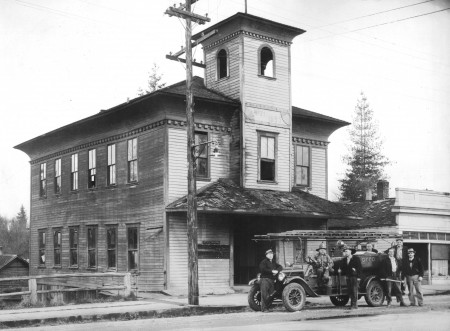 1940 was thirty years prior to the formation of the Granite Falls Historical Society, but the picture above was taken in Mar 1940, just before the combination City Hall & Firehouse was razed, to be replaced by the City Hall we have today.  The building was built in 1893, as the first downtown school building, for newly-named School District 21.  If you look closely, you can see the faded lettering on the bell tower.  After seventeen years of community growth, a large brick school was built as a replacement in 1910 (on the same site), and the original building was moved with a team of horses two blocks north, to serve as the first standalone City Hall.

Incorporated in 1903, Granite Falls WA was in all respects a “modern” logging town, complete with its own power company, multiple mills, railroad service, and thriving business center, until the Great Depression decimated the timber industry.  By 1940, the downtown business district had shrunk, and City Hall (with its front doors widened to accommodate the lone fire engine) had fallen into disrepair.  Fire Chief Hi Jewell leaned on the hood of the engine, while the entire volunteer fire department stood by.  They were about to dismantle the building, and the WPA would complete a new one the following year.  Thank goodness that Hi Jewell was also the town photographer for 50 years, and provided many of the thousands of photographs we have in our collection today. 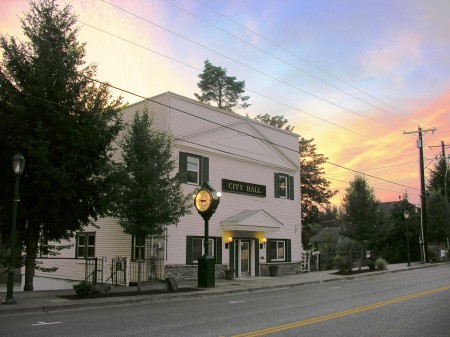 The “new” City Hall survived the 20th Century, and in 1989, as part of the Washington State Centennial, a town clock was erected in front.  Unfortunately, the inner workings failed after a dozen years, and a subsequent repair failed only a year later.  After sitting stationary for a decade, the clock is once again keeping perfect time, having been restored in 2014 through the combined efforts of the Granite Falls Historical Society and City staff.