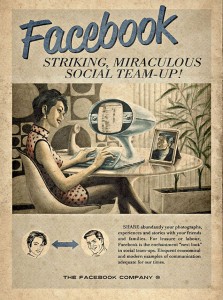 Like you, I’m always looking for ways to increase readership on our museum’s Facebook page. Shortly after I took over administrative duties of the page, I started posting more frequently, and I noticed that, while readership was slowly climbing, it was not as fast as I hoped. So I listed some ideas that I thought would capture a wider audience. This list, which I regularly revise, not only provides direction, it also serves as a backup when I need to make a post, even if I’m short on ideas.

Lately I’ve successfully drawn parallels between current events and local history. Our city recently conducted a street improvement project that involved pulling up some long-buried street car tracks. On the job’s first day, I posted a vintage photograph of that same block showing a street car. The post received a number of likes and a share. The next day I again referenced the work currently underway and posted another vintage photo. Imagine my surprise when I checked back on the page. The number of likes had grown considerably, and the number of people who friended our page was steadily climbing!

This was fantastic, but how and why was it happening? And so quickly?

A visit to the webpage of the local newspaper revealed the answer: The photographer documenting the work included a link to our Facebook page for a peek at historical photos. In just a couple of days, the page gained 45 friends. Since that time, I have continued to post local historical ties to current events with great success.

During the summer Olympics, on the day that the U.S. men’s basketball team played Tunisia, I posted an image of Scott May. Mr. May, a native of Sandusky, won a gold medal in Montreal in 1976 as a member of the men’s basketball team, and his photograph generated likes steadily throughout the day.

When the new school year began, I posted century-old classroom photographs, and in honor of Labor Day, I posted images of workers at area companies, such as the Sandusky Tool Company. These are events that most of us can relate to, and the images are evocative to our readers.

Although conventional postings—such as a listing of hours—have their place, I find that historically themed posts create more interest. Another great idea is to friend similar organizations to learn more about how others interact with their own Facebook communities. Adapt clever ideas, and give them a local spin. By friending these organizations and linking or commenting on their posts, you also:

What ideas have you used to grow your social media presence?