Historic Columbia Announces the Winners of the 2014 Preservation Awards

Historic Columbia Announces the Winners of the 2014 Preservation Awards

COLUMBIA, S.C. (May 8, 2014)— To celebrate the accomplishments of local architectural, construction and rehabilitation projects, Historic Columbia Foundation held its annual Preservation Awards Luncheon on Thursday, May 8 at 701 Whaley.

For decades Historic Columbia has recognized local projects that have maintained or added to the historical, architectural and cultural heritage throughout Columbia and Richland County by presenting recent preservation projects with awards in Preservation Leadership, Preservation/Restoration, Adaptive Use and New Construction in a Historic Context.

“Preservation is the pillar upon which Historic Columbia was founded,” said Robin Waites, executive director of Historic Columbia. “The projects we honor this year reveal a real interest in sustainability, creative design and sensitivity to the small and large features that make our community unique.” 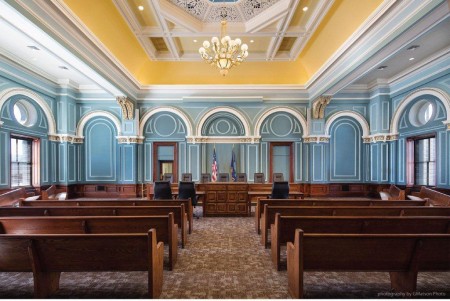 Preservation Leadership Award: First Citizens
Since moving into its new corporate headquarters at the corner of Main and Lady streets in 2006, First Citizens has had a major impact on the development of this signature Main Street block. The visually dynamic, post-modern headquarters is bracketed by the Brennen Building to the south and Creason Building to the east. First Citizens’ commitment to the city center is evident in each of these projects, but none is more significant to the preservation community that the rehabilitation of the Brennen Building at 1210-1220 Main Street. Once on the brink of demolition, this building was afforded a creative team from the bank, led by Peter Bristow, Brett Frantz and John Freeman, who realized the importance of the place and pored over its historic details as well as future opportunities. Through their leadership, this building now serves as an example for others embarking on the restoration of historic properties, and the collection of their properties on the block set the highest standard for both new construction and adaptive use in the city center.

“In 2005, the fate of one of the oldest buildings on Main Street was uncertain. This August, First Citizens cut the ribbon on what can be viewed as the poster child for adaptive use in Columbia,” said Waites. “The Brennen Building’s use marks a continuation of hospitality and service that generations of Columbians know and love about this building, and thanks to First Citizens, that legacy is preserved for generations to come.”

Preservation/Restoration Award: Brennen Building
First Citizens Bank’s sensitive treatment of this landmark structure preserved the building’s most significant architectural features, while retaining the building’s historic use as a downtown gathering place. Most often remembered for the Capitol Restaurant, which operated here from 1911 to 2002, the building was in a severe state of disrepair when First Citizens acquired it. Studio 2LR designers worked closely with local and state historic preservation staff to preserve and restore as much of the building as possible. Hood Construction and W.H. Bass worked from 2011 until 2013 to restore the original cast iron window heads, columns and balcony details on the façade. Upstairs, the historic windows, exterior siding, fireplaces, heart-pine flooring, beams, trusses and millwork were all preserved and are now interior spaces. A landscaped courtyard completes the project serving First Citizens Café.

Preservation/Restoration Award: Council Chambers at City Hall
The restoration of the third floor council chambers in City Hall began as a small project intended to repair historic plaster and paint. As City of Columbia staff removed ceiling tiles, they uncovered a long-hidden skylight, prompting City Council to increase the project’s scope. The final restoration came to also include new lighting, a new audio/visual system and the complete restoration of the historic skylight. Previous renovations to council chambers had severely damaged the original plaster ceiling and parts of the walls; the specialists in historic plaster restoration at Dillon Construction addressed structural concerns, restored damaged plaster and replicated missing decorative elements to bring the room back to its original appearance. The project was completed with a historically-sensitive color palette and subtly selected modern bench and carpet fabrics.

Preservation/Restoration and New Construction in an Historic Context Award: Booker T. Washington Auditorium
Penn Contracting and the Boudreaux Group worked with the University of South Carolina, the Booker T. Washington Foundation, Dr. Bobby Donaldson and Ashley Bouknight to restore and revitalize the only remaining building of the historic African American Booker T. Washington High School. On the exterior, workers stripped layers of paint, exposing the classic red brick of the original 1956 construction. An addition to the building recalls the same red brick and features historic details that reference the structures that are no longer extant. Visitors now enter the building through the prominent new entryway into a gallery showcasing memorabilia and history of the former high school. The second story includes classrooms, and the auditorium has been updated with air conditioning, new lighting and seating, improved acoustics and handicapped accessibility. The process of restoring and adding to the auditorium has served as a source of community healing and historic celebration, and the completed structure serves its historic purposes as an academic lecture hall and community venue.

Adaptive Use Award: Seegers-Habenicht Building
Built shortly after the fire of 1865, the building that now houses Mad Monkey is one of the oldest structures on Main Street. Owner Martha Fowler was committed to the sensitive rehabilitation of this landmark building, which has been in her family since its construction.  replicate a façade with a recessed entryway like the one the building had during the 1930s. The building’s envelope required immediate attention, and both the façade and the rear elevation needed new windows. The second phase of the adaptation involved updating the interior of the structure, while preserving as much exposed masonry and woodwork as possible. Modern light fixtures and audiovisual equipment line original bricks, but the building’s trademark is the restored barrel sign out front, reminding passersby of its heyday as a brewery.

Adaptive Use Award: Reeder House
A local landmark, the Reeder House is a Columbia Cottage-style former residence believed to have been built during the 1860s. When Zion Baptist Church acquired this property in the Vista, the structure was in desperate need of repair. The first phase of the project involved a comprehensive stabilization of its exterior. Considerable effort was made to stabilize the building’s masonry piers, and the original wood siding was salvaged where possible and replaced as necessary. The façade was returned to its original window configuration. Columns, railings and steps were restored and the entire exterior was painted. The interior was adapted as three offices, a conference room, two bathrooms and a work area. Original hardwood floors in the foyer and the conference room were salvaged and restored. The result is an excellent adaptive use with a great attention to restoring the historic character of the exterior of the structure.

About Historic Columbia:
In November 1961, a small group of individuals intent on saving the Ainsley Hall House from demolition officially incorporated as the Historic Columbia Foundation. Over the next five decades the organization, which was founded on the premise of preservation and education, would take on the stewardship of seven historic properties in Richland County. Today, the organization serves as a model for local preservation efforts and interpretation of local history. Visit historiccolumbia.org or find us on Twitter, Facebook, Instagram orYouTube for more details.