History in Motion: What We Can Learn from U-Haul’s Love for Local History

History in Motion: What We Can Learn from U-Haul’s Love for Local History

What’s the first thing you think of when you hear the word summer? Vacation? BBQs? The beach? How about moving? Every summer U-Haul estimates that 17-20 million people in North America move. I learned that after visiting their website a couple of weeks ago while sitting in summer traffic on Interstate 5 (thanks for driving, Phyllis!). The reason I visited their website was because of a graphic I saw on one of their trucks (see image below) . It featured a woman in period dress holding a lantern in front of an old house with a map serving as the background. Underneath her was the following: “Abolishing slavery decades earlier than the U.S., Canada became a haven for enslaved people seeking freedom. How did ‘conductors’ assist thousands? LEARN MORE ABOUT PATHS TO LIBERTY AT…uhaul.com.” 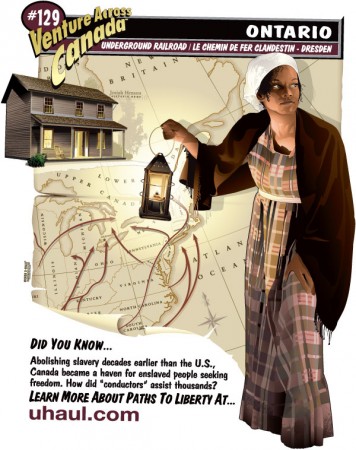 Every time I see a *shout out* to history someplace I don’t expect to find it, I take notice, and this was no exception. I had seen U-Haul trucks with regional images before, but not any that went into detail about history. I was curious to know more. Whose idea was this? I guessed that a higher up at U-Haul had to love history, and I was right. Enter Shannon Myers, a member of U-Haul’s marketing team and coordinator of their SuperGraphic program.  She explained that CEO Joe Shoen is indeed a history buff, and a lover of geography, too.

The SuperGraphic program began in 1988 with the simple goal of giving back to the communities U-Haul serves throughout North America. Originally, trucks and trailers featured iconic monuments like the Statue of Liberty, but the program evolved over time, moving away from the iconic and more towards lesser known facts and stories. These are what U-Haul calls their Modern SuperGraphics. “Educating people about little known facts can have a great impact,” explains Myers, a history lover herself. When it comes to criteria for selecting what is worthy of a SuperGraphic (and there is a vetting process, which is why Big Foot has yet to make the cut even though he has been suggested numerous times!), the following points come into play: 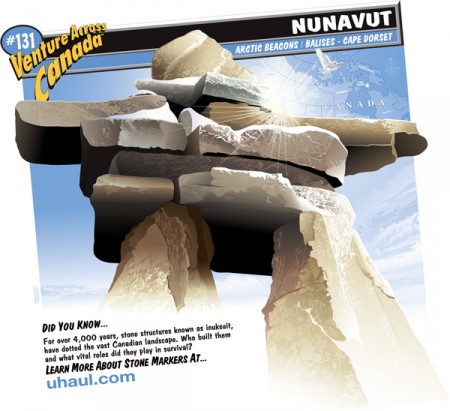 Topics are usually related to regional curiosity, history, science, or mystery. (Humongous Fungus in Michigan? Who knew?) Myers does preliminary research on a subject, consults with experts, and makes proposals to a team of people from U-Haul’s marketing and art departments. Ultimately their CEO signs off on each selection.

Little or lesser-known subjects with a lot of meat on the bone are most desirable. The company wants to encourage people to explore and discover new things about their communities. While the Underground Railroad is a topic that many people know something about, there are elements of the subject that are lesser known by many, such as the fact that after 1850, most slaves looking for freedom had to travel all the way to Canada for their safety. “There are misconceptions about the Underground Railroad, and the truck is just one way to add to the depth of the story,” explains Myers. Additionally, Shoen sees the trucks as a way to support parents in introducing new topics to their children. Each Modern SuperGraphic features web content that digs deeper into the subject. (Layering of information… Does that sound familiar?) 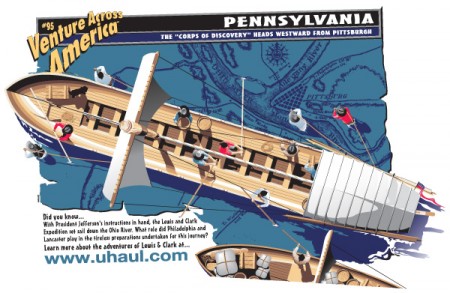 Ideally, geography should factor into the story. They are in the business of moving, after all (and don’t forget about the passions of the CEO!). Every topic explored relates to a place the company serves. They like to see that represented visually.

There is no profit to be made by U-Haul for featuring a particular story, but they are pleased if a truck brings a historic site or place of interest more traffic and revenue. (See the publicity related to the Underground Railroad truck as an example.)

So what’s the takeaway for us? Stories associated with the site or museum where you work may not get the attention of U-Haul, but how about another business in your community? A car dealership or mechanic? A doctor’s office? Think about places where people have to spend a lot of time. Could we provide modest posters, exhibits, or write-ups that tie into why someone is visiting a particular establishment? And let’s not forget about places where people may be “forced” to spend time—like a jury room, a juvenile detention facility, or even a local jail. Really, I’m not kidding here.

This type of outreach may not align with every institution’s mission, but I think these places are under-tapped and underappreciated. Where I work, for example, we have a participatory program called Curious Cases where we explore crime and justice in early Los Angeles, making surprising connections to today’s headlines. We’ve talked about how we can take some of the content from certain programs and turn it into an offsite program for these audiences. 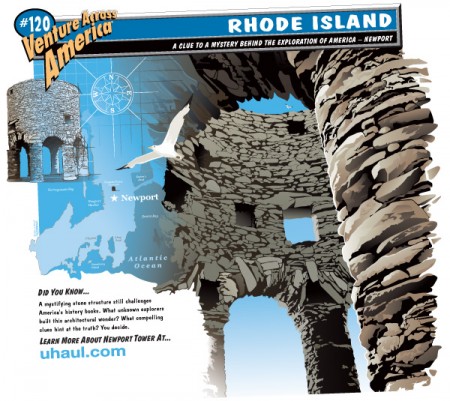 Going back to Joe… all I can say is thank you. You could be making big bucks off of a long line of advertisers, but you aren’t. In this regard, you are right here with those of us in the trenches, encouraging people to be curious, to care about their surroundings, to see how we are connected, and to have fun learning (even if it’s during breaks as you load and unload precious belongings!). Joe, like many of us, cares deeply about his customers, so much so that he even gave his cell phone number out on national television so that customers could call him directly with questions, comments, and concerns (he still answers these calls!). I’m definitely not advocating that anyone go out and do that, but dang, he’s the real deal!

Have you seen history pop up in unexpected places, or are you thinking about trying something new to get people excited about stories you have to share? Please let us know!

Alexandra Rasic is the Director of Public Programs at the Workman and Temple Family Homestead Museum in the City of Industry, CA, and chair of AASLH’s Educators and Interpreters Committee. She’s moved (only) five times—with four of the five involving U-Haul trucks. As long as she does not have to drive them up steep hills (thanks, Paul!), she’s good to go!