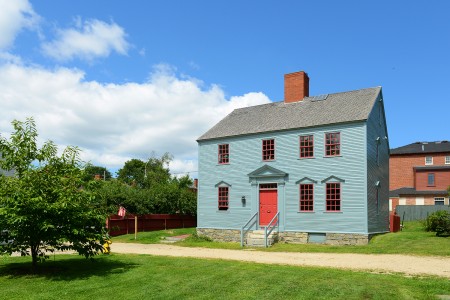 At their best, historic sites and house museums provide meaningful and personal touchstones to the past. They provide a forum and a place to connect historical, social, and cultural issues with contemporary counterparts. They inspire us to think about and act on those issues in our own lives and communities.

Yet for much of the public, a historic house museum connotes something at least partly negative: an old building filled with precious things carefully protected by velvet ropes and draconian guides, offering an experience that is alternately boring and fanciful, passive, and even off-putting. House museums have overlooked the essence of these places as homes, precluding current relevance in favor of immutable stories and physical barriers. House museums are at their worst when they overemphasize the physical attributes of the site—its aesthetics and its collections, the “thingness” of the place—through rigid standards for historical preservation and collections care, carried out at the expense of the site’s educational and inspirational potential.

The cultural tourism model has failed most house museums. Iconic places, like Mount Vernon, will always have a place in the museum landscape, but the majority of house museums are not destination sites. Places of local—as opposed to regional and national—relevance, may suffer lingering deaths if they do not adopt new methods and philosophies. Inevitably, the roof will collapse, figuratively and literally. It is time to reconceptualize historic sites and embrace the Darwinian principle that survival requires adaptation. 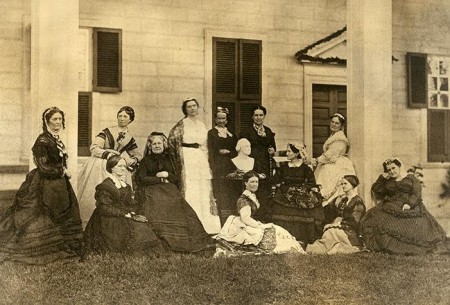 Photograph of the Mount Vernon Ladies’ Association, circa 1873, taken by Leet Brothers.

A good start would be to abandon the term historic house museum and with it the physical and metaphorical velvet ropes it has come to imply. The word house objectifies the museum setting, treating the building as something that is as much a part of a collection as the things contained within it, rather than as a place of warmth where real people lived and breathed, ate and slept, drank too much, had sex and raised children, fought with each other, and maintained strong and controversial belief systems—in short, all of the things that happen in a home today.

A historic home museum acknowledges and celebrates the events of everyday life, de-sanctifies the house and creates instead a setting for the occurrences of life. It converts vague and sacrosanct historical figures into flesh and blood, warts and all, because our flaws are an important part of what makes us human. A house is just a building, but a home is a place of life with the potential to connect the past and present through objects, stories, and emotions—our shared humanity. 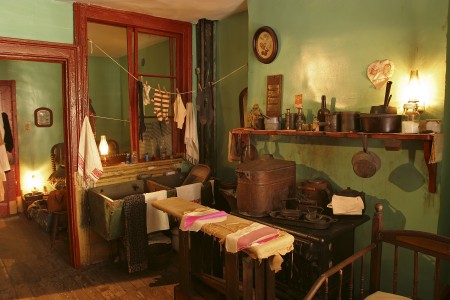 Examples of historic home museums do exist, including the oft cited—but still worth mentioning—Lower East Side Tenement Museum, which focuses on difficult and complex issues involving immigration and assimilation. There, objects play a supporting role to illustrate stories of real people and families. Their visitors—including descendants of immigrants, recent immigrants, and international tourists—seek personal relevance, and often find emotional connections, in the experiences of the historic inhabitants of 97 Orchard Street. At its heart, the Tenement Museum is a site of activism, presenting and interpreting the variety of immigrant experiences on Manhattan’s Lower East Side. Its challenge is to draw on connections between past and present to elevate the national conversation about immigration.

A lesser-known example is Dr. Bob’s Home in Akron, Ohio, where Robert Smith and Bill W. (Wilson) battled their addictions and hammered out the basic principles of Alcoholics Anonymous. Throughout the 1930s and 1940s, Dr. Bob and his wife Anne helped hundreds of people, invited many to stay in their home, and counseled them over endless pots of coffee. Today, a sign above the front door greets visitors with the words “Welcome Home,” as does the staff inside. The greeters serve a dual function of presenting the story of Dr. Bob and Bill W., and of engaging visitors who might be struggling with their own addictions. When I visited in 2007, a greeter offered me a fresh cup of coffee brewed in a replica of Dr. Bob’s original coffeepot and a seat at the kitchen table. Visits are self-guided, with simple labels indicating the rooms where Dr. Bob and Bill W. slept. Every June, 12,000 people make a pilgrimage to Akron for Founder’s Day, visiting the site of the first A.A. meeting, the graves of Dr. Bob and Anne Smith, and Dr. Bob’s Home. These places have deep personal and spiritual meaning to visitors struggling with their own recoveries. Dr. Bob’s home is an activist place of the spirit that only happens to be made of bricks and wood. 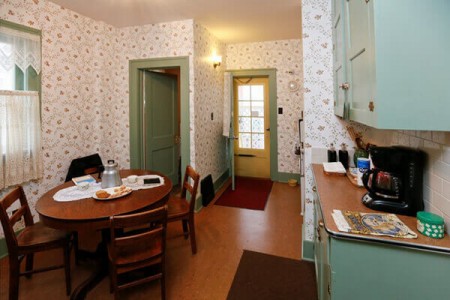 The kitchen in Dr. Bob’s Home. Via drbobshome.com

Within homes, families—in their many forms and meanings—have always engaged in domestic activism—in small ways inside kitchens, bedrooms and parlors, in discussions about chores and family responsibilities, or in larger ways with arguments about politics, race, gender, and social structure and hierarchy. Historic home museums should be places to discuss and even argue the many meanings of home, from family rituals to the social organization of slave cabins. Historic home museums have the potential to be the kitchen tables of cultural discourse. Identifying links between culturally relevant topics, historical importance, and mission-driven programs will result in enhanced and sustainable visitor and community engagement.

House museums a century ago sought to express the “American Experience” in large part through Progressivism and the Colonial Revival. These social movements promoted “proper” aesthetics and “traditional” American values as a means to good moral character and behavior, especially for poorer working classes and newly arrived immigrants. During this period, an underlying goal of the creation of new house museums was to protect and enshrine American virtue and to indoctrinate “non-native” peoples with this principle, itself a form of activism, guided by politics and beliefs that are now obsolete. In the years leading to the American bicentennial, the American experience in house museums was further shaped by celebratory stories of patriotism, in part a reaction to the political and social upheaval of the Vietnam War era.

During the movement toward professionalization in the first half of the twentieth century, the role of house museums as venues of activism became secondary or lost. However, social activism within museums has become more the norm of late, in places like the Underground Railroad Museum and Freedom Center and with organizations such as the International Coalition of Sites of Conscience, which counts among its members the Martin Luther King, Jr. National Historic Site, the District Six Museum in South Africa, the Gulag Museum at Perm-36 in Russia, and the Lower East Side Tenement Museum. Other sites also offer hope, such as Jane Addams’ Hull House Museum with its community organic garden and alternative labeling project, which the museum describes as “civic engagement and reflection.” These activist museums hope to engage and inspire their visitors to engage in personal or social change. 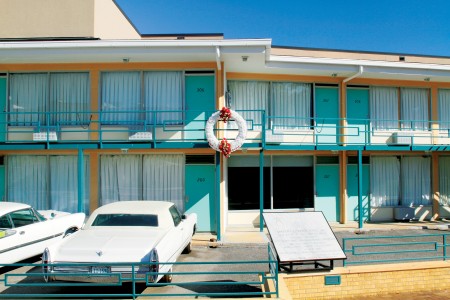 Unfortunately, professional standards for collections care and preservation have contributed to emotionless interpretation and limited visitor engagement. The typical house museum tour focuses on the senses of sight and listening and ignores the powerful human connections achieved through the remaining senses. This is most evident in the treatment of objects. The standard rule for visitors is “Don’t Touch Anything.” This is taking the easy way out. It does not require decision-making by museum professionals and preservationists, only obedience to a single uniform approach. In fact, some objects are more durable than others. Some are more replaceable than others. Further, at the risk of bringing angry torchbearers to my heretical door, some objects are more important than others, and there is such a thing as an acceptable risk. Instead of don’t touch anything, the revised standard that historic house museums should adopt is “Don’t Touch Everything.” Museums should invite visitors to touch, hold, sit upon, and even smell certain objects. Historic sites should employ the collective wisdom of curators, conservators, educators, preservationists, peer reviewers, and funders in making decisions about responsible and flexible use of collections.

The shift in emphasis from house to home—from rigid, unimaginative sanctification to flexible, creative activism—will require a careful balance between preservation needs and audience engagement, combining the imagination, creativity, and professional integrity of the preservation and museum fields. It also necessitates a close and ongoing reexamination of professional standards and practices, supported by funding agencies and museum and preservation professional associations. This process is already underway, with the launch in 2009 of the Standards and Excellence Program for History Organizations (StEPs), a voluntary assessment program for small- and mid-sized history organizations, created by AASLH with support from the Institute for Museum and Library Services. 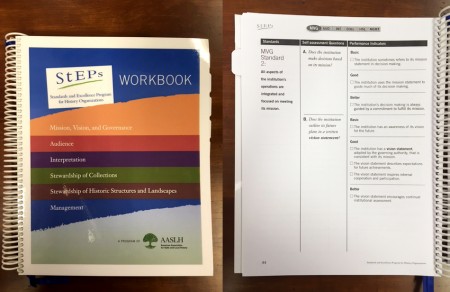 The modern American experience remains mutable, and its representation within house museums is unsettled. Its definition incorporates multiculturalism, characterized by the maturity of the Civil Rights movement, the advent of expanded LGBTQ rights, and the confident voices of Americans of many ethnicities and political persuasions in American government and culture. Technology, especially the rapid spread of Web-based social networking, allows us to speak and accept the cultural languages of many distinct groups. The Internet and some aspects of popular culture, including television, promote non-linear thought, through which we are able to weave seemingly unrelated ideas into rich and highly individualized patterns. However we define the contemporary American experience, most house museums, with their tradition-bound stories, rigid professional standards, and linear interpretation (in the form of guided tours) lack the nimbleness to close the cultural gap and remain relevant to their visitors and communities. In recent years, house museums have begun to do a better job of telling the stories of immigrants, slaves, working class people, and women, but there is still much work remaining.

The most difficult hurdle may be overcoming the reluctance of historic sites to rethink or abandon traditional approaches. This is understandable. Making changes to bring in an expanded or different public, tell new stories, and connect with modern culture is often a frightening prospect that risks desanctification of a site and alienation of existing audience. For some house museums, the chasm between house and home may be too vast. However, the alternative is a site that enshrines dead people, dead ideas, and dead culture—and a collapsing roof.

Ron M. Potvin is Assistant Director and Curator of the John Nicholas Brown Center at Brown University (an Academic Program Member of AASLH).

This article was originally published in the Spring 2010 issue of History News magazine. You can read recent History News articles by becoming a member or find issues older than three years on JSTOR.