Houses in the Mail…Within These Walls at the Smithsonian

Houses in the Mail…Within These Walls at the Smithsonian

Working at a historic house museum presents its own set of challenges, developing an exhibition with a historic house as the key artifact presents a different set of challenges. One of my favorite projects when I worked at the Smithsonian National Museum of American History focused on the largest artifact in the museum’s collection, an almost 250 year-old house that stood at 16 Elm Street in Ipswich, Massachusetts, thirty miles north of Boston.

In 1963, the town planned to raze the house and build a parking lot, but several earnest members of the local historical society came up with a plan to save the house the very day the backhoe arrived to tear it down. They paid the crew chief to wait while they called the Smithsonian. True story! Remarkably, curators at the Smithsonian decided to accept the house. The Ipswich house was carefully documented, dismantled, and shipped to Washington where it was reassembled in 1966 and interpreted as an example of early American building practices. The house was on display for years, but eventually was put into storage. 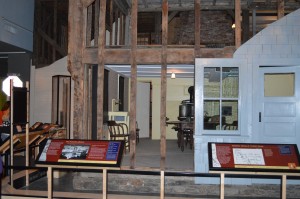 It became a secret artifact as visitors were not even aware of its existence. In the late 1990’s, however, the house’s period of slumber came to an end when new curators embarked on a project to research the inhabitants of the house – at least eighty-six of them. They asked questions like: Who were these people? How did they change the house over time? How did the neighborhood change? Their research would be the basis for a new exhibition.

From the start there were huge challenges. First, the artifact’s fragile condition did not allow millions of visitors per year to enter the house; second, the limited space available for the exhibition did not allow for a ramp or access to view the building’s second floor. So the developers needed to figure out how to draw visitors into the story while they walked around the outside of the first level. Third, the space for the interpretive labels and supplementary artifacts was on the walls of the exhibition, requiring visitors to constantly switch focus from house to labels. Finally, while most of the house had been transported from Massachusetts, a third of it had not. The plan was to create the illusion of the entire house by hinting at the end section that wasn’t there using an obvious framework.

The curators chose to focus on five families who lived in the house and to create vignettes, with minimal furniture, to help visitors imagine the house as it changed over time. With the house as the primary focal point, the family stories were interwoven throughout, showing how their circumstances transformed the house and how the context of the neighborhood changed. Since the house could not talk, the stories would be told through historical evidence. Their stories connected to broad themes in American history: class, slavery, revolution, abolition, immigration, and war.

One of the key goals of the exhibition developers was to challenge museum visitors to think about their own homes as historical sources. By exploring various source materials that revealed clues about the Ipswich house, visitors could learn how to research their own homes. The final section of the exhibition showed some of the ways that historians researched the Ipswich house. From documents like census records, insurance maps, and city directories, to paint samples, floor joists, and panel sections, there are many clues that tell the house’s stories. Another source was the people who lived in the house. Richard S. Lynch, Mary Scott’s grandson, mentioned in the kitchen section of the house, provided much information about growing up in the house during World War II. He was amazed that his family’s home is in the Smithsonian. In a poignant visit, he brought his own grandson to the exhibition’s opening and showed him where he had grown up. He is probably the only person who can say that his childhood house is in the Smithsonian.

The exhibition “Within These Walls…” opened in 2001 and remains on permanent display at the museum in Washington. The online exhibition is located at http://amhistory.si.edu/house/

This one of many stories featured in my new book A Grizzly in the Mail and Other Adventures in American History (http://grizzlyinthemail.com), University of Nebraska Press, 2014, and is part of a chapter recounting some of my favorite historic houses in the United States.