How to Turn a Classic Mid-century Building into a Museum

How to Turn a Classic Mid-century Building into a Museum

Museums are often located in buildings that were built for some other purpose and it is a challenge to adapt those spaces for exhibits and visitors. How does one effectively deal with visitor flow? How much of the original structure should be saved and what should be demolished? And, most important, how do we get visitors to recognize the fact a museum is inside the walls that once housed a manufacturing plant, a courthouse or an office building? 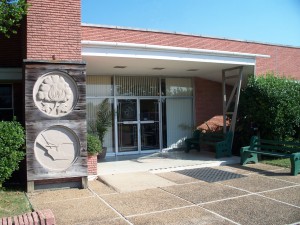 Entrance to MoMD prior to renovation work. Holly bushes obscure the building.

The Museum of the Mississippi Delta (MoMD) is undergoing its first major renovation since moving into the former headquarters of Billups Petroleum Company in 1974.  A grant from the Mississippi Arts Commission’s Building Fund for the Arts program provided the seed money the board used to raise the necessary funds for the $450,000 project.

MoMD is located in a classic mid-century designed building erected in 1957. The architects were careful not to disturb the clean lines of the building; they chose instead to enhance the fact that a museum is behind the brick façade. As of this writing, the project is halfway done and the results are impressive. Hidden behind large holly bushes for decades, the façade of the building once had an impressive row of windows on either side of the front doors. With the holly bushes removed, one can now see the distinct look of that mid-century era. It’s as if the building is being reborn.

At some point in the life of the building, the windows were bricked up and now no longer have their original function. The architects suggested having an artist create a continuous mural to be placed inside the former windows to bring life to the building’s lackluster appeal. Sketches are currently being reviewed and colors decided upon in an effort to bring attention to the museum located just off the frontage road of a state highway. We’re still considering ideas 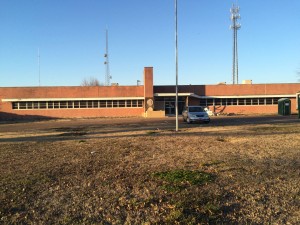 MoMD part way through renovations with facade of building visible

for signage with a bold, almost “in-your-face” design that will make it impossible not to wonder what’s behind those doors.

Stay tuned for the next installment.