In a Pence-ive Mood about Coins

In a Pence-ive Mood about Coins 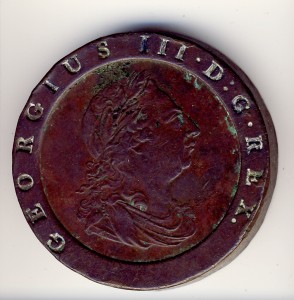 I recently saw the film, “Saving Mr. Banks,” and began to replay “Mary Poppins” in my head, including the song “Two Pence a Bag.”  (As a child, I could never figure out what “Tuppence” was.)  If we were to document that transaction in Nomenclature, we’ve got “Bag” and…well…”Coin.”

Heather Dunn recently posted a blog about specialist collections and chose an image of coins to illustrate it.  The Nomenclature Task Force recently discussed the issue of coins and it seems that, at least through anecdotal observation, a lot of museums end up adding more specific coin terms to their catalog records, either as additions to their built-in lexicons to be entered in an Object Name field or as entries in an Alternate Name field.  If a lot of museums do this, then maybe these small objects are not all that specialized after all.  Perhaps we should go ahead and make specific coin terms an official part of Nomenclature.

Unlike paper money, in which a bill is still a bill (or, say, “Note, Federal Reserve”) regardless of its denomination, the terminology for coins varies, based usually on nationality, denomination, or both.  Museums do like to distinguish between, say, quarters and pennies, in the cataloging process, especially if they have large assemblages of coin collections donated by a collector.  (And these museums aren’t limited to those that specialize in money; my museum has more than 3,500 coins!)

We could easily go overboard on coin terminology (I’d just go with “Penny” on the two pence), but it probably would be useful to have an authority list of about 50 coin names most used by North American history museums to ensure some degree of consistency.  The Task Force has compiled such a list and plans to add the new terms to the next edition of Nomenclature. `

If you’ve read Ron Kley’s article in the current issue of History News, you’ll see that we’re hoping to roll out a new edition in 2015.  So please do make your lexicon additions known to the AASLH Task Force.  A revised submissions form is now up on the web site.