Ford’s Theatre is a National Historic Site that also operates as a working theatre, producing four main stage shows each year.  For many years, the National Park Service provided all historical interpretation, while Ford’s Theatre Society, my independent non-profit employer, presented the theatre. In 2006, the board of Ford’s Theatre Society and the Board of Trustees expanded its organizational mission to “celebrate the legacy of President Abraham Lincoln and explore the American experience through theatre and education.”

In the following six years (I started as Director of Education Programming in 2007), Ford’s has become an institution that integrates theatre and history, using our expertise in theatrical programming to interpret Abraham Lincoln’s presidency, his assassination and his legacy both on and off the stage.

Using theatrical performance as a primary means of interpretation has both challenged and inspired us.  It has meant thinking beyond traditional notions of “exhibition” and working with theatrical professionals to understand one another’s definitions of high quality work.  Specifically, we have come to our own institutional understanding of the essential qualities of traditional theatre and how they differ from first person and third person interpretation.  Let me share some examples with you.

History Plays
When we began to play a larger role in interpretation at Ford’s Theatre National Historic Site, the artistic staff discussed inviting a playwright to come see the historic theatre and the exhibits beneath the theatre, and to hear formal interpretive talks, delivered from the stage by National Park Service rangers.  Our instructions were to take all that he heard and learned from the talks and put that information into a short, dramatically interesting piece of theatre. As with any exhibit plan, we struggled to come up with a point of view for the piece.

When working in partnership with a playwright, this is complicated by the need to maintain the integrity of the his or her artistic vision, and we learned the hard way that it did not send the message we wanted if the story we told about Abraham Lincoln’s assassination were told from the perspective of his assassin.  We started again with a new playwright, and this time, it worked.

A 30-minute play by Richard Hellesen titled One Destiny is performed on the stage of Ford’s Theatre twice a day in our busy season, and is told from the perspective of the men and women who were working at the theatre the night of the assassination and try to imagine in retrospect if and how they might have stopped the terrible crime committed that evening.  It has proved a powerful means of putting the visitor in the shoes of the people with whom they can most identify – not the actors in the crime, but the bystanders.

History on Foot
In 2008, Ford’s Theatre closed for a major restoration and renovation project.  For 18 months, we had no space to interpret the events of April 14, 1865.  The resolution to this dilemma came in the form of a wonderful realization that has opened our eyes to interpretation beyond the walls of the historic site.  With the commission of another work from our “playwright in residence,” Investigation: Detective McDevitt was born, and it still lives on the streets of Washington City from March to October. Detective James McDevitt was a Washington Metropolitan Police detective, assigned by Secretary of War Edwin Stanton to investigate the conspiracy behind the President’s assassination on the night of April 15, 1865. 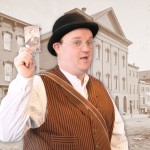 Twice a week from March to October, one of our “McDevitts” (there are currently two actors playing the role) starts off from Ford’s with up to 40 “deputies” tagging behind him, to retrace his steps that night, ending nearly two hours later in front of the White House.  The actor takes on the voices of the people he interviewed, reading aloud from their statements handed to him by the same, paying deputies.  McDevitt has been so successful that we commissioned a second piece, called A Free Woman: Elizabeth Keckly, which takes visitors through the Washington known to Mrs. Keckly, a formerly enslaved dressmaker who became a confidant to Mary Lincoln during her years in Washington.  These two History on Foot tours have proved challenging but rewarding, and they have expanded our interpretive space to include the whole of downtown Washington.

Our greatest lessons learned from these experiments? The voices of historical figures are as powerful as the objects in our exhibits, and they often reach an audience left (metaphorically) cold by object-based learning.  Don’t be afraid to bring historical actors – and observers – to life, and challenge yourself to partner with your local artists and theatrical institutions.  If you want to explore this more, consider joining us at the October 2013 global conference of the International Museum Theatre Alliance (IMTAL) at the National Museum of American History in Washington, D.C.