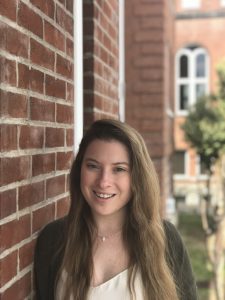 Our spring intern is wrapping up her time with us at AASLH! Anne Rappaport has been working on continuing education projects in our office for the past few months while completing her graduate program and sharing her valuable perspective as a folklorist.

Originally from Long Island, Anne has a B.A. in history and museum studies from the State University of New York at Potsdam and will graduate with her Master’s in Folk Studies from Western Kentucky University in May. I asked her to tell us more about her program, her chosen field, and how her work intersects with the world of public history.

What is the field of folklore, and what do folklorists do?

Folk Studies or folklore is the study of expressive culture that is transmitted informally between people; contemporary legends, coming of age celebrations, and foodways are all examples. Folklorists who work in the public sector are called public folklorists. Many folklorists work in the same positions as history professionals — they are museum curators, grant administrators, historic preservation officers, and so on. Folklorists, like oral historians, use ethnographic methods to interview people and learn about their culture. Like some public history professionals, folklorists collaborate with communities to help present their culture and history to the broader public. But they can also be social workers or community advocates. The conservation of historic sites and culture go hand in hand: when efforts are made to preserve or conserve one, the other is affected.

Tell us about a project involving folklore that you’ve worked on.

During my first year at WKU, I took a Museum Procedures class with Dr. Michael Ann Williams. As part of the class, we created an exhibit called “Korea Through Kentucky Eyes.” The exhibit focused on the way both historic and current Kentucky residents have interacted with and viewed Korean culture. As the assigned Program and Marketing Coordinator, I worked with the Kentucky Museum and the Kentucky Folklife program to put together demonstrations of traditional Korean foods and planned the opening reception at the Kentucky Museum. 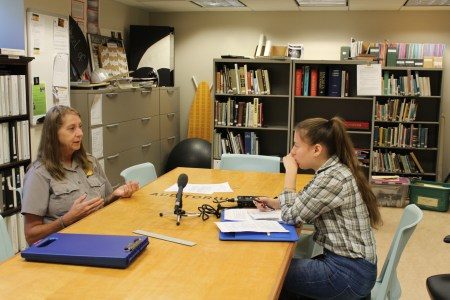 Interviewing a ranger as part of a cultural survey with Mammoth Cave National Park.

How does folklore intersect with public history?

Folklorists and public historians do a lot of the same jobs and often have similar missions. Historic preservation is one area where there’s a lot of overlap. Partnerships among the National Trust for Historic Preservation, the American Folklife Center, and others really advocated for collaboration with historic preservation, environmental sustainability, and folklife conservation. They all believe that if you destroy a historic site, all the culture that went with it is gone as well. Folklife and folklore are very connected to place and the two have an effect on each other. If a community leaves a place, that place no longer has the same cultural meaning. There are a lot of people doing work in both history and folklore, and they’re applying historical methods of analysis to folklore. There’s a whole section of the American Folklore Society that is dedicated to both topics, and they give the Wayland D. Hand Prize for Outstanding Book that Combines Historical and Folkloristic Perspectives. The 2014 winner, Burley: Kentucky Tobacco in a New Century by Dr. Ann K. Ferrell, is a prime example of a work that combines history and folklore. There’s also an AFS Working Group on Folklore in Historic Preservation Policy, as well as a Folklore and Public Policy Working Group on Folklore and Museums.

Where do folklore and public history differ?

I think it depends on the type of historian. The biggest difference, and maybe biggest learning opportunity, deals with how each field sees and interacts with the communities that exist today. Like historians, folklorists can also cover a wide time span, but for the most part they’re talking to people in the present about the way that their history and their culture is affecting them today. Oral historians, who are talking with people in the present day as sources, overlap a lot with folklorists. A difference which some scholars have pointed out between historians and folklorists is that historians study change while folklorists study what stays the same — not that culture is stagnant, but which elements of it persist through time are important.

Where will folklore take you next?

My ultimate career goal is to work as a staff folklorist for an arts council or museum. Typically, the folklorist will conduct fieldwork and interviews to plan public programming like festivals and exhibits, and may also be a grants administrator.

We thank Anne for all of her assistance this year and look forward to learning more about how folklore and public history can work together!