Is There a Place for Pokémon Go in History Museums?

Is There a Place for Pokémon Go in History Museums?

Some very excited colleagues came into my office earlier this week: “Hey…we’re not only the site of two Pokémon Gyms, but we’ve also got seven Pokéstops!” “OK,” I said, “now how do we engage these people?”

Since last Friday, Pokémon fever has swept the globe and we’ve noticed a definite increase in the number of people exploring our site. In the ridiculously off chance that you aren’t familiar with Pokémon Go, software developer Niantic hit a grand slam with this a location-based augmented reality mobile game that encourages users to get outdoors and explore their surroundings as they strive to collect coveted Pokémon characters. So why should history museums care about this? Is it just another fad? As it is, many of us struggle to continually come up with clever Facebook and Instagram posts—we don’t have time for another “thing.” Well, my team is of the mind that cultural phenomenons like Pokémon Go are definitely worth thinking about for a number of reasons. Here are two: 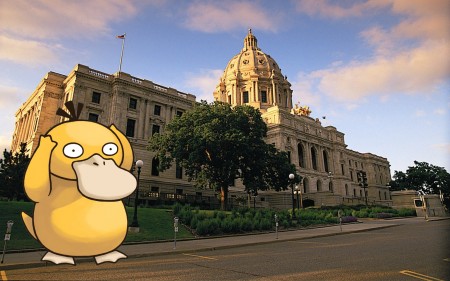 Reaching out to new audiences

Take a minute to read Russell Holly’s article about who is playing Pokémon Go. Yes, players get caught up in their screens, but they are also socializing with friends and complete strangers. They are talking to one another while exploring new landmarks and neighborhoods. (How many of us would kill for this kind of ongoing interaction in our institutions?) Yesterday, my friend John who lives in Portland posted the following in his Facebook feed:  “Say what you will about Pokémon Go, but I’ve never seen so many diverse groups of people out on a Tuesday night. I went for a run along the waterfront and I saw friends and lovers wandering about, battling sundry creatures and experiencing the city. I snickered at one couple, who denied they were playing Pokémon until I admitted that I too had downloaded the app out of curiosity.” Like visitors to our museums, players of this augmented reality game have a variety of motivations for engaging with this technology. For some it’s nostalgia, for others it’s an obsession or a curiosity.

Seeing a great opportunity to engage with people who like to explore, the National Park Service quickly released a video welcoming Pokémon players to their parks and encouraging them to take a moment to explore the incredible reality of their surroundings. (Well done!) At the Homestead, we did something similar on a much smaller scale with a simple Facebook post. 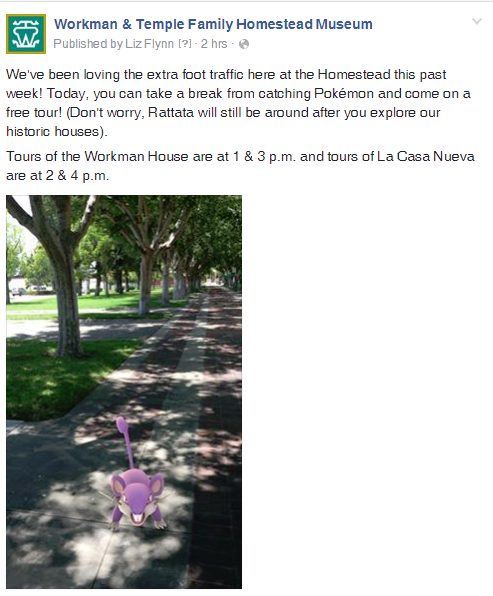 While we don’t have hard data from Niantic about who is playing the game at the museum and in our neighborhoods, my team has seen that it’s mostly people from their mid-30s to elementary school-aged kids. These are people that many of us are trying to appeal more to, especially folks in their teens and 20s. We’ve decided to set a couple of Pokémon Lures (modules that attract Pokémon trainers to Pokéstops for a period of 30 minutes for a fee of 99¢) at our next First Sunday Picnic. These low key, relaxing events provide visitors with more opportunity than usual to explore our historic site on their own. It’s all about free choice. We offer a few activities at each picnic that visitors can choose to participate in, or just relax with family and friends. If we see players on site, our plan is to engage them in conversation. We want to know if we were on their radar before Pokémon Go, and encourage them to learn more about the museum and what we have to offer. “You think you’ve got a great ‘collection’…check out ours!” We see this as an opportunity to have some one-on-one conversations that will provide us with more info about an audience we want to better understand.

Being responsive to current events and trends

History museums are working on becoming more nimble and less static. We’ve got a new reputation to cultivate, and not just when it comes to how we can use Pokémon Go! Museums that address complex social issues such as the National Underground Railroad Freedom Center quickly responded and have kept conversations going about the jarring recent events in Baton Rouge, St. Paul, and Dallas. Are they posting and talking about Pokémon Go? No. It’s not the right fit, but for a historic site like ours in a park-like setting, or a museum like the Hirshhorn who used social media to welcome Pokémon players featuring a painting from their collection, great! The first organization to comment on their post was the National Museum of Women in the Arts who said “Hirshhorn Museum and Sculpture Garden we love you! This is hilarious.” 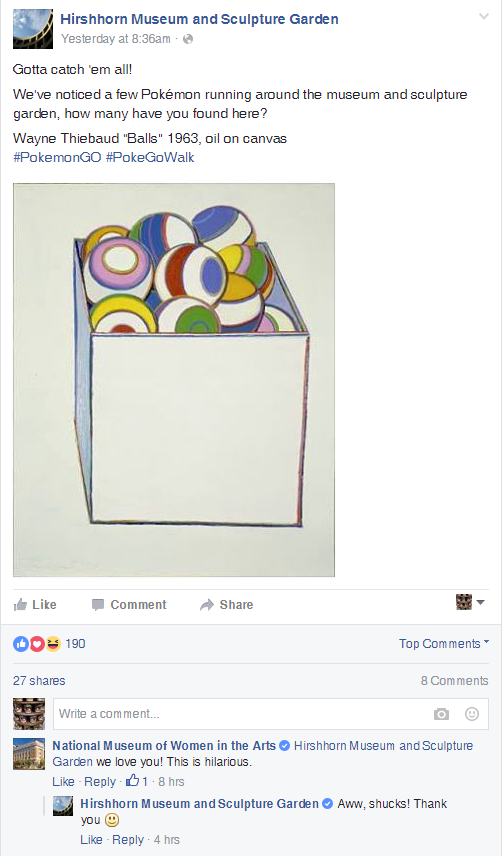 What is not hilarious, however, is hearing about all of the Pokémon Go being played at places like the National Holocaust Museum and the National September 11th Memorial and Museum. It’s disheartening that these institutions have to ask visitors not to play the game in their galleries out of respect for other visitors and the subjects being addressed. If only we could flip the switch on everyone who lacks good judgement… But we also should not assume that people who are engrossed in their smartphones at historic sites are tuning out.

NPR’s All Things Considered host Ari Shapiro asked tech correspondent Glen Weldon if Pokémon Go symbolized the downfall of civilization. After a good chuckle, Weldon answered “You know, I – we went to the Lincoln Memorial which is a Pokémon gym for a Facebook Live piece yesterday looking for people playing this game. We looked for 45 minutes to find somebody who was actually doing it because instead, they were reading about Abraham Lincoln. This is not the downfall of society. This is just another little bend in history.”

There are numerous ways that institutions of every size can use current trends and events to promote programs and collections. If you are in need of a rich topic to explore, just look to politics as we are ramping up for the presidential election. Do you have something in your collection about a specific election, or a letter from someone important to your institution’s story that states a strong or controversial opinion? Use it as an opportunity for discussion and debate. Do you have sheet music or recordings of campaign songs? Maybe you don’t have the time to write an in-depth blog post about them, but you can share an image of an item from your collection with a link to something like professor Brian Ward’s post about the “politics,” impact, and importance of campaign music in US elections.

Now back to Pokémon Go! It’s up to each organization as to how they react, respond, tap into, or ignore the phenomenon. It’s made for some great conversation around the office this week about the features of the game—but more importantly about visitor behavior, access to our site, the impact of crowd-sourced information, publicity, security, free-choice learning, and much more. 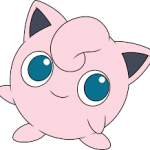 Alexandra Rasic is the Director of Public Programs at the Workman and Temple Family Homestead Museum in the City of Industry, CA, and chair of AASLH’s Educators and Interpreters Committee. She worries that her six-year-old son will figure out how to unlatch the backyard gate and be caught wandering the streets of their neighborhood in search of Jigglypuff.