Kettle Creek Battlefield: A Laboratory for Exploring Layers of Relevance

Kettle Creek Battlefield: A Laboratory for Exploring Layers of Relevance

The Kettle Creek Revolutionary War Battlefield, located between modern Tyrone and Washington, Georgia, has a history of notoriety but also of long periods of obscurity. The latest chapter in its preservation is how twenty-first century methods are expanding its interpretation beyond the battle to reach new audiences and preserve the space for the future. The battle of February 14, 1779 fought between new Americans from three states became the end of a failed grandiose scheme, created in New York and London, to win the Revolution for the British. Georgia served as a base, winning hearts and minds of Americans in all of the states south of Maryland, back to the King’s cause. It became a state legend and county names honor individuals who served at Kettle Creek.

The battlefield’s preservation began when the Wilkes County (later renamed the Kettle Creek) Chapter of the Daughters of the American Revolution acquired 12.5 acres of the presumed site of the battle in 1900. The United States government erected a standard federal monument there in 1930, and in 1960, it became a county park. Daniel Elliot of the Lamar Institute did an archaeology survey in 2008 that identified where the fighting occurred and located the nearby related Carr’s fort site in 2012 with federal grants.

The Kettle Creek Battlefield Association, formed in 2011, has worked to develop, expand, and preserve the site. Through its efforts, the battlefield now covers more than 60 acres and has a handicap accessible gravel-lined interpretation trail with educational markers. To protect the integrity of the site and its view, some 1,600 acres of private lands has passed into conservancy. The KCBA now seeks more information on the site to better plan future acquisitions of land, grant applications, and improvements. Bigman Geophysical has surveyed some 20% of the battlefield with ground penetrating radar and, with aerial LiDAR (laser imaging, detection, and ranging), documents the battlefield, graves, old roads, building sites etc., for the site’s whole history. Cadaver dogs have confirmed the graves that the previous archaeology survey located, and bullets and buttons have been found using metal detectors. 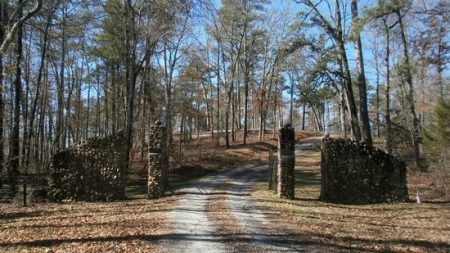 Entrance to the Kettle Creek Battlefield.

The KCBA is also exploring the site’s other histories. It contracted with the State Botanical Garden of Georgia for a plant inventory of 14 acres of the site. The report shows it as “an important reservoir of plant diversity.” It identified a rare surviving prairie canebrake that will be preserved and expanded. Dan Williams has published Kettle Creek Rocks, a pamphlet on the special geology of the area, and ideas for the future include even a study of the site’s woodland fungi. Special artifacts have also turned up. Paleontologist Mark Gelbart has written that Little Kettle Creek “is the only Pleistocene fossil site in the entire piedmont region of southeastern North America, yielding remains of mammoth, mastodon, bison, deer, voles, lemmings, and catfish.” The site has also documented a rich history of Native American artifacts (an Indian kittle, or fish trap, gave the site its name).

These plans and successes include more than fieldwork. Dr. David Noble published Patriots in Georgia Revolutionary War Engagements 1776-1782, a survey of battles with the names of documented participants, continuing a tradition in Kettle Creek promotion that goes back more than a century. Carolyn Faz has written a history of Wilkes County’s forts and a fully documented listing of all persons she has been able to identify, on both sides, who were at the Battle of Kettle Creek.

Through the work of so many different people from several different perspectives (historical, archaeological, botanical, paleontological), this place becomes a model for studying the total significance of a site. The KCBA will acquire more land for the park, not just to remember a military event, but also to preserve and promote its other pasts, including its natural history.  By exploring all of the battlefield’s opportunities for education, Kettle Creek makes a case for relevance on several levels and also stands less chance of again fading into obscurity. How to distribute the artifacts and information from the new explorations, whether among area museums or on the site, however, now becomes the challenge.