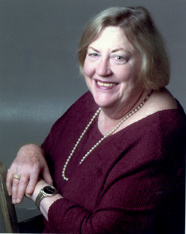 In Kansas City, people of color got little recognition for their civic contributions until Laura Hockaday saw an opportunity and acted.

As the self-proclaimed “people editor” of The Kansas City Star for eighteen years, she put leaders of the African-American and Hispanic communities on the society page, where they deserved to be. Because of her, Kansas City is a better place. “Her Wednesday profiles introduced readers to scores of role models. Week after week, her column proved that Kansas City society was more inclusive than exclusive,” the Star wrote in her obituary.

Laura, from a prominent Kansas City family, was hired on at the Star in 1962 as a writer in the women’s section. When asked in 1982 to be society editor, she took the job “on the one condition that she would define what the society was,” her cousin Irv Hockaday, former CEO of Hallmark Cards, told the Star.  “Coverage then consisted of party photos and scores of names. She thought the names and faces did not reflect the city’s diversity,” the Star wrote. The president of the Urban League of Greater Kansas City called Laura a trailblazer. “You’d always see her, being places where those before her dared not go,” Gwendolyn Grant told the Star. “One courageous lady,” local philanthropist, educator, and civic leader Barnett Helzberg Jr. said. “More than just a great journalist, she had a lot of courage to do what she did.”

I was born in Kansas City, but didn’t know Laura until the early 2000s when I began researching my grandfather’s service in World War I. Googling names from a book about his unit, I connected with Laura — her father and my grandfather had fought together. We became friends. I emailed her in October 2017 about the 2018 AASLH conference, hoping she would get involved. When she didn’t write back right away, as she always did, I learned she had passed away a few days earlier.

When AASLH meets in Kansas City in September, I hope you will remember Laura Hockaday and her efforts to shine a light on Kansas City’s rich diversity and the contributions of all citizens to its success.