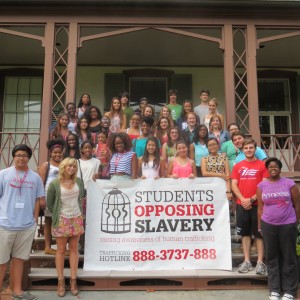 Last February, President Lincoln’s Cottage launched Can You Walk Away?, an exhibit on modern slavery in the United States.  Given our history and the work President Lincoln did here developing his ideas around the Emancipation Proclamation, we realized that we have a responsibility to see how far our country has come in the fight for freedom.  As a result of this exhibit, we began working with a group of four high school juniors who started Students Opposing Slavery as a grass-roots, student led organization to raise awareness and action against human trafficking and modern slavery.  President Lincoln’s Cottage worked with these students in several different capacities and when the founders looked at what would happen to SOS when they graduated they approached the Cottage about becoming the home-base for SOS activity.  With the founders, we came up with a plan to host a week-long international summit for high school students and developed a strategy for continued engagement with participants throughout the school year.

Overall, the pilot was a tremendous success and one of the best professional experiences I’ve ever had.  As we make plans for next year, I wanted to share with you a few of our lessons learned.  None of these are earth shattering, but I do hope that you will add your own challenges and success stories from similar programs, so that our field can continue to develop engaging youth programs.

These are just a few of the many lessons we learned along the way.  I am anxious to see how our ideas for continued engagement throughout the school year will go, but I am encouraged by the feedback from our student participants.