How Local History Can Enrich Narratives of the LGBT Past

How Local History Can Enrich Narratives of the LGBT Past 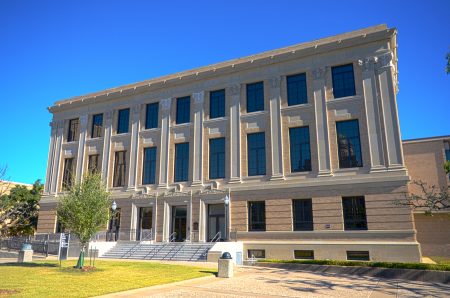 This summer, I spent a month at Texas A&M’s Cushing Library as part of the Don Kelly Research Collection Fellowship, investigating twentieth-century LGBT youth culture and activism. The Collection’s extraordinary archive of gay literature and culture contains a treasure trove of community newspapers, journals, independent zines, pulp novels, and other materials. As I planned to craft a narrative that was nationwide in scope, I hadn’t anticipated Texas A&M or the town of College Station figuring in to my research. Having spent most of my life in the South, I am particularly interested in the region’s LGBT history, but going into the summer, I had little context for the local area where I’d be looking through the archive. Nearby Houston’s gay and lesbian past, particularly the pivotal 2003 Supreme Court case Lawrence v. Texas, had crossed my radar. But College Station, as far as I knew, had played little role in the LGBT history of the state or region, let alone the nation. Or so I thought! 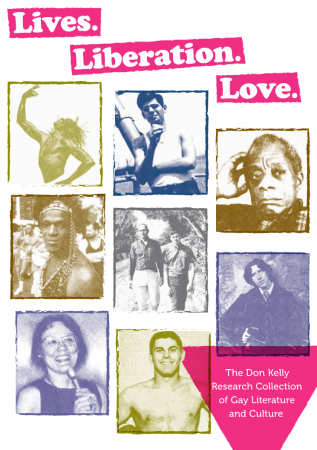 As I delved into the Kelly Collection’s materials, one thread in the story of LGBT youth I followed concerned gay and lesbian student organizations on college campuses. After the founding the first tentative groups in 1966 and 1967, the emergence of lesbian feminist and gay liberation movements from 1969 onwards led to an explosion of campus organizing. As gay and lesbian groups proliferated at dozens and then hundreds of colleges and universities across the country, students found themselves locked into fierce battles with hostile administrations who attempted to thwart their fledgling organizing efforts. A 1974 survey by the National Gay Student Center found that 29% of student groups “failed to obtain recognition or had problems doing so,” while 20% had resorted to litigation to secure it, concluding that “campus gay groups are currently the most persecuted type of student organization in the United States today.” [1]

And where did one of the critical cases in this ongoing struggle take place? At none other than Texas A&M University! It turns out that the very campus where I was working had been the origin of an epic legal battle stretching over nearly a decade. When a small group of Aggies founded Gay Student Services in 1976, the administration denied them recognition, and students faced harassment on campus. Undaunted, the group took the university to court, lost, appealed, and continued fighting until 1985, when the Supreme Court declined to hear Gay Student Services v. Texas A&M University, effectively deciding the case in favor of the students and setting a national precedent compelling intransigent universities to allow gay and lesbian students the right to organize. I’d stumbled upon an instance of local history that proved critical to my overall narrative of the development of LGBT youth organizing across the United States. [2]

Adding a local history focus to my research broadened my engagement with the Kelly Collection’s archival sources, revealing areas of strength and hidden gems that I would have otherwise overlooked. While the collection’s materials span dozens of countries with a primary focus on the United States, donor Don Kelly’s lifelong connection to Texas ensured that the collection included a particularly rich set of materials from the state. I had access to monthly magazines, local “bar rags,” newsletters from neighborhood groups, and other rare, locally relevant materials on which to draw as I pieced together the story. 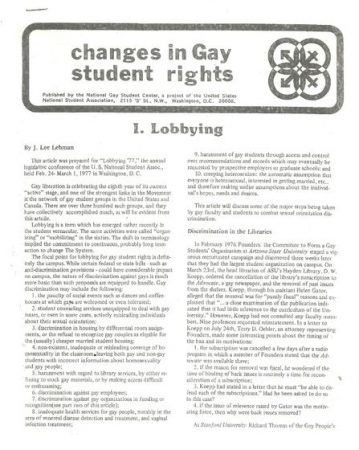 Pamphlet published by the National Gay Student Center in 1977.

But as I delved deeper into local history, my sources weren’t limited to the contents of the formal archive. Over dinner one night, the head of the university’s LGBT resource center related things he’d learned from discussing the case with some of the people who were directly involved, both student activists and administrators, providing an inside look into how institutional responses had evolved over time. When I mentioned my interest in the court case, I learned that one of the research librarians had actually been an openly gay student at the university while the court case was ongoing in the early 1980s. These conversations offered me an unexpected and rich window into the everyday experience of students affected by court battles over gay student group recognition.

So when I delivered the public talk culminating my summer fellowship, I illustrated the development of gay and lesbian student struggles by discussing the case that had taken place right there at Texas A&M. For current students who wanted to learn more, I referred them to their campus LGBT center, which had organized a commemorative symposium and panel discussion remembering the case on the 25th anniversary of its resolution.

So to young historians like myself doing archival research that’s regional or national in scope, the lesson I’d share is: pause and take a look around you. How does the place where you’re doing research fit in to the broader narrative you’re telling? What local stories can illuminate your overarching narrative? What community resources can you draw on beyond your immediate archive to add detail and color to the story? You might be surprised—as I was—at just how revealing your unique local history context can prove as you trace the broad sweep of history. And the research you produce maybe able to enrich and contextualize the work of local historians in their efforts to commemorate the past in their area.

Nikita Shepard is a MA candidate in the Department of History at Middle Tennessee State University. For more information about the Don Kelly Research Collection, please contact the Cushing Memorial Library at Texas A&M University.