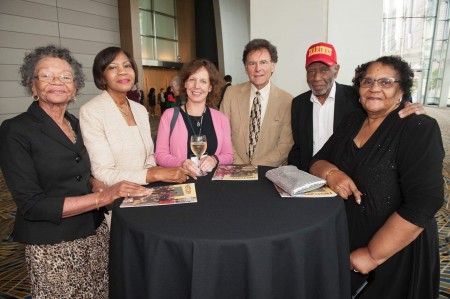 Elizabeth Marston, Director of the Elgin History Museum (Elgin, IL), was awarded a scholarship to attend the 2016 AASLH/MMA Annual Meeting. You can learn more about the AASLH Small Museums Scholarships here.

I was lucky enough to receive a Small Museums Committee scholarship to the AASLH Conference in Detroit this year. The scholarship allowed me the opportunity to attend the awards banquet where the Elgin History Museum received an Award of Merit for Project 231. That short hand title is a documentary/traveling exhibit project officially titled Two Boxcars, Three Blocks, One City: A Story of Elgin’s African American Heritage. The award and recognition means a lot to a small museum in suburban Illinois, and members of the team made an enormous effort to travel to Detroit. Executive Producer Ernie Broadnax and his immediate family drove from Elgin. Other Broadnax extended family flew in from the east coast. Elgin Area Historical Society President, Bill Briska, also drove up to be part of the festivities.

Nicest awards program ever! It was held in one of the beautiful Cobo Center ballrooms along the Detroit River. Entertainment included Martha Reeves and the Vandellas, a famous high-energy Motown musical group, performing songs like Heat Wave to a dancing crowd. Equally fabulous was the high school girl who connected tap dance to Irish dancing through sailors and slaves on slave ships. The whole time illustrating the dancing techniques!

Listening to the descriptions of the 63 awards presented that night was to hear what the best and brightest museums in the country are doing to create better experiences for the public, to create better access to their collections for the public. They are all committed to telling local unknown stories. Sitting there made me realize how we are all little by little preserving history in each corner of each state in the country. Really inspiring!