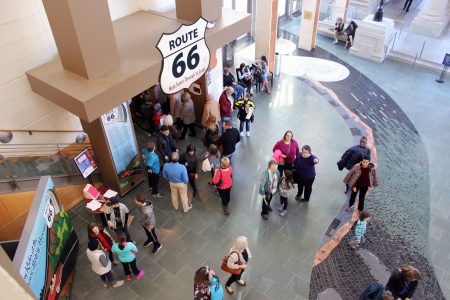 Crowds wait in line to see Route 66: Main Street Through St. Louis at the Missouri History Museum during the last week of 2016.

The Missouri History Museum welcomed a record 517,337 visitors in 2016. This is the most visitors the Museum has received since the 1930s when Charles Lindbergh’s trophies were on display during the height of his popularity. 2016 also marks the third consecutive year that the Museum has surpassed 400,000 visitors, another first since the 1930s.

“Our staff has really been looking at the trends in museums and listening to visitors to understand what people want to see in exhibitions,” said Dr. Frances Levine, president of the Missouri History Museum.

The Missouri History Museum staff credits a fundamentally new approach to special exhibitions for this recent attendance trend. The Museum shifted from its special exhibition schedule of mostly national traveling shows to a focus on local history. They decided to create more exhibits in-house, showcasing St. Louis’ history in new and innovative ways.  This schedule of regionally focused exhibitions has also allowed the Museum to present more of its renowned collection of artifacts to the public. 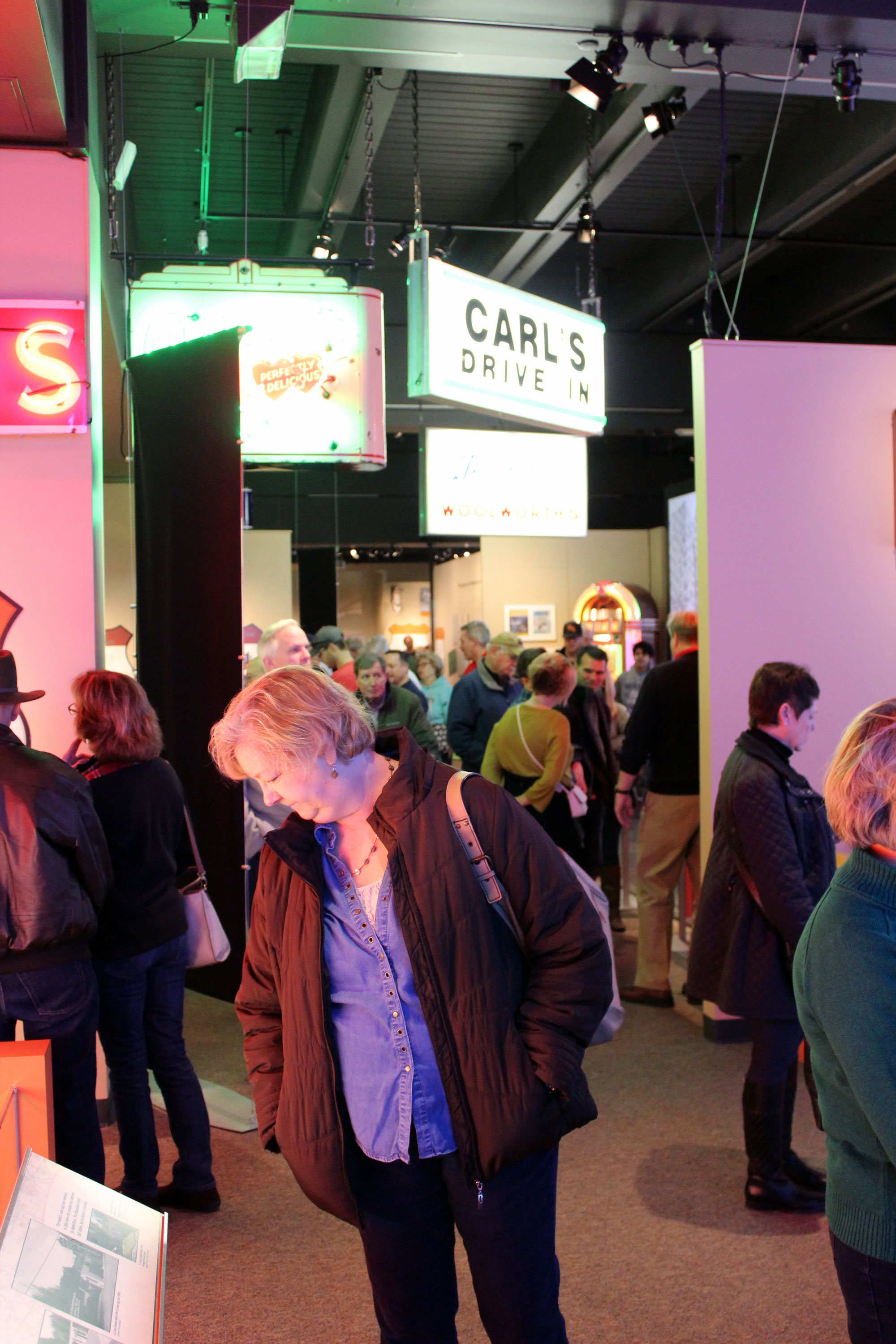 “Most museums rely on one big exhibit, often a traveling show, to get big numbers and then go back to business as usual,” said Dr. Jody Sowell, director of exhibitions and research. “They see a huge fall in the numbers the next year. We have turned this practice on its head by making a commitment to tell more local stories, display more of our collection, and do it all in new and compelling ways. That philosophy is paying off with consistently high attendance numbers.”

When the emphasis on local exhibitions began in 2014, the museum saw a 63 percent increase in attendance over the previous year. From 2000 to 2013, the average annual attendance was 354,789. The most recent three-year attendance average is 484,235.

Creating special exhibitions in-house, utilizing mostly the Missouri History Museum’s own collection has resulted in some of the most popular special exhibitions the Museum has ever hosted. Four of the top five most-attended exhibitions in the organization’s 150-year history have opened during the past three years: 250 in 250 in 2014; A Walk in 1875 St. Louis in 2015; Little Black Dress: From Mourning to Night and Route 66: Main Street Through St. Louis, both in 2016. 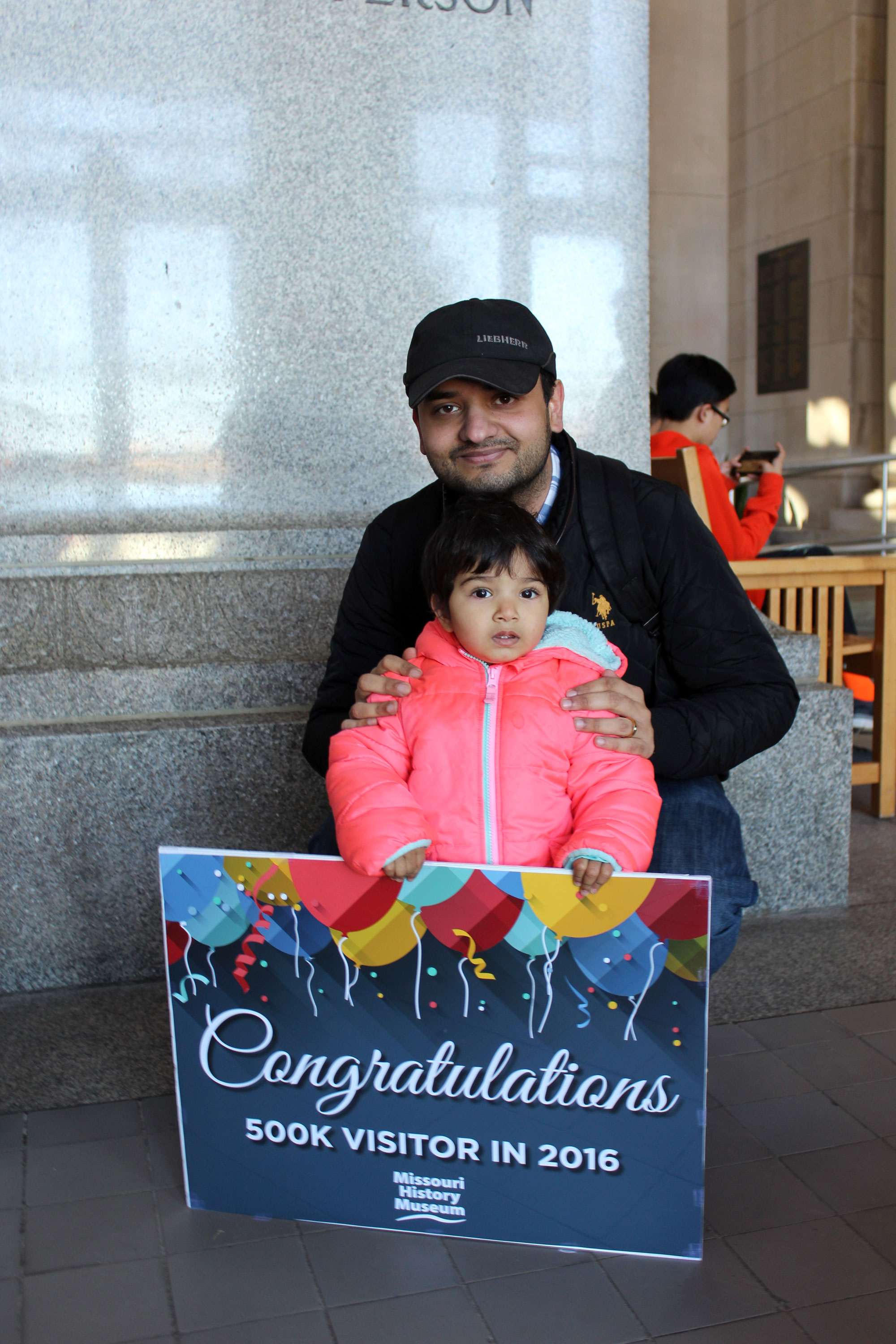 The Missouri History Museum welcomed its 500,000th (and 500,001st) visitors at the end of December: St. Louis City residents Himanshu Aggarwal and his daughter Aarya.

“Every day I walk through the Museum and see our galleries full of visitors who are engaged and enthralled by the stories we are telling,” said Dr. Levine. “We often see crowds stretching out of our special exhibition galleries as members of the public literally line up to learn about history. That is a thrilling sight for us as educators to see.”

In addition to a locally focused exhibition schedule, the Missouri History Museum also credits its robust schedule of programming and its world-renowned collection for drawing record numbers. That can especially be seen in the increase in attendance to the Museum’s Library and Research Center on Skinker Blvd., which welcomed 6,722 visitors in 2016. That is the most visitors to the Library and Research Center since in opened in 1992, due in large part to new K-12 programming at this building.

“We are so appreciative of our tax funding that allows us to keep our doors open, but we are especially grateful to our members and our sponsors for years like this one,” said Dr. Levine. “We could not create so many new exhibits in-house, present so many programs and conserve more artifacts without that additional support.”