In addition to an ongoing project to publish the papers of Joseph Smith, the founder of Mormonism, the Church History Department of The Church of Jesus Christ of Latter-day Saints (Mormons) has recently published “The Journals of George Q. Cannon: Hawaiian Mission, 1850-1854.”  A relatively unknown Church member when he began his mission, Cannon would subsequently occupy a prominent leadership role in the Church for more than forty years. 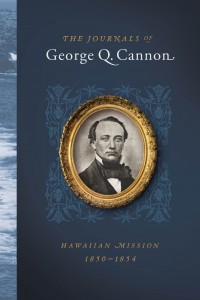 As one of the first Mormon missionaries to Hawaii, Cannon soon found himself in a contest with Congregationalists and Catholics for adherents.  His journal presents a picture of the religious activities of believers of each of these faiths and provides a view of missionary life.

Although the primary focus of the volume is religious, like so many other Mormon missionaries Cannon also presents a view of local culture, customs, and happenings of the people among whom he labored.  Because Mormon missionaries at this time functioned as “circuit preachers” traveling without “purse or scrip,” Cannon lived with the locals and experienced native food and accommodations firsthand.  While he labored primarily on Maui, he also spent significant time on each of the other principal islands.

He regularly reported on major events, such as a devastating 1853 small pox epidemic that struck the Islands, and described local happenings, including a detailed account of how a sugar mill operated.  He traveled to the top of 10,000 foot extinct volcano Haleakala, visited the active volcano Kilauea and did things that most visitors to the Islands did not do, such as sailing the thirty miles from Mau‘i to the “Big Island” in an outrigger canoe, and eating local staples such as dog and donkey.

Cannon’s mission took place in the middle of a century of change in Hawaii that began with Kamehameha the Great’s unification of the islands and culminated with the annexation of the islands by the United States.  His journal also provides a snapshot of the evolving nature of the Hawaiian government and its laws, particularly as they pertained to religious organizations.

Overall, this volume presents a multifaceted and unique history of the religious, social and political happenings of a “foreign” nation that would one day become our fiftieth state.

Chad Orton is an archivist for the Church History Department of The Church of Jesus Christ of Latter-day Saints and is the editor of the recently published Hawaiian mission journal of George Q. Cannon.