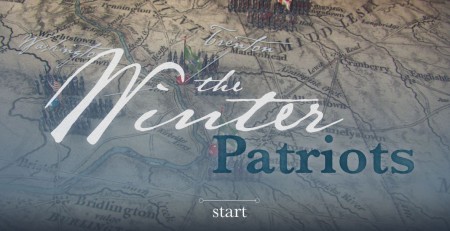 MOUNT VERNON, VA – George Washington’s crossing of the icy Delaware River on Christmas Day 1776 is one of the most remarkable and well-known events in American military history.  Why did this crossing on a freezing winter’s night matter so much?  The Winter Patriots, Mount Vernon’s cutting-edge video presentation, looks at not only this pivotal moment of the American Revolution, but also the battles and challenges confronting Washington and his army at places like Trenton and Princeton.

Starting during the summer of 1776, the story follows the Continental Army as it is repeatedly defeated and driven from New York, south across New Jersey towards the Delaware River.   After crossing over the Delaware River on Christmas Day, Washington’s Continentals swiftly defeat three different armies at three different battlefields around Trenton and Princeton.  Washington’s lightning campaign, coupled with timely guerilla actions, completely unhinged the British position, forcing their precipitous retreat back towards New York.

“If we want the next generation to truly understand the role that George Washington played in America’s founding—and to grasp why he was crossing the Delaware— we need to tell the story using the kinds of rich media and digital channels that a modern audience now expects,” said Rob Shenk, senior vice president for visitor engagement, who oversaw the production in collaboration with the Washington Library’s founding director, Dr. Doug Bradburn.

Like Now or Never: The Yorktown Campaign, The Winter Patriots incorporates cutting edge animation, historical imagery, and live action footage into an exciting, fast paced presentation created by Wide Awake Films.  Much of the live action footage was filmed with Hessian, British, and American re-enactors in the deep snows of New Paltz, New York.

The Winter Patriots is available to view for free at mountvernon.org/winterpatriots. The presentation is available to download for a $4.99 fee. The production has been made possible through the generous financial support of the F.M. Kirby Foundation of Morristown, New Jersey.