Music in a Faith Community

Music in a Faith Community

Music has a positive social and psychological effect.  It can bring a group of people together around a common cause.  Anyone who has ever performed in a band or orchestra, or sat around a campfire with a guitar, or sung in a church choir, can attest to this.  Like other religious groups throughout history, the Shakers (officially called The United Society of Believers in Christ’s Second Appearing) utilized the power of music to help with the formation, survival, and stability of their unique faith community. 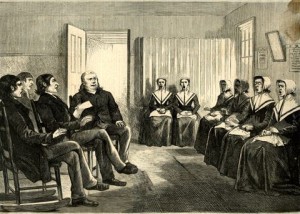 Shaker songs were expressions of faith and doctrine shared by all members.  Since the Shakers lived in their own Heaven on Earth communal villages, intentionally separated from what they called the World, their songs also served as an important tool for community creation, cohesion, and exclusivity.  Shaker songs endorsed and emphasized commitment mechanisms which detached Believers, all converts, from their former Worldly lives and attached them to their faith community as Shaker Sisters and Brethren.

Of the more than 10,000 known Shaker songs, the vast majority were for worship, not entertainment.  Most Shaker songs were vocal only, a cappella and with no instrumentation, and no harmony.   Every Shaker was encouraged to sing along with the group, to the same melody, without soloists.  The Shakers even invented their own type of musical notation, using letters of the alphabet instead of the shape note system more common at the time or the round headed note system.  This all emphasized the Shaker ideals of uniformity, equality, humility, and separation from the World, and de-emphasized individuality in favor of the whole communal group.   Shaker music fostered bonds of trust, cooperation, empathy, group exclusivity, and communal commitment among diverse individuals.

The Shakers apparently did not approve of non-Shakers, or Worldly People, singing Shaker religious music:

“We have ever doubted the propriety of publishing our Music to the World, and we think we have never done it.  When filthy and polluted lips attempt to sound forth the songs of Zion, it reminds us of the impious Belshazzar who profaned the vessels of the house of the Lord in the service of his dumb Idols.” Quote taken from a letter written by the Shaker Ministry at New Lebanon, NY to the Ministry at Union Village, OH, January 8, 1847

At the historic site museum where I work today, Hancock Shaker Village in Pittsfield, MA, we are pleased that the Shakers eventually relaxed their objection to having non-Believers perform their music.   Interpretive programs, concerts, and sing-a-longs of Shaker music comprise an important part of our living history activities, enjoyed by tens of thousands of visitors each year.

Shaker music has spread from their network of historic communities of the past to our modern, secular world of today in many ways.  The most famous Shaker song is Simple Gifts, written in 1848 by Elder Joseph Brackett of the Shaker Village at Alfred, ME.  This lively tune has been performed, adapted, and recorded by many non-Shakers over the years.  Composer Aaron Copland incorporated it into his ballet score Appalachian Spring in 1944.  Judy Collins, the popular folk singer, had a Top 40 AM radio hit with her version of the song in 1970.  English songwriter Sydney Carter adapted it in 1963, transforming it into Lord of the Dance, a popular hymn.  This in turn eventually inspired Michael Flatley to produce a popular travelling show of the same name, following up on his rise to fame as part of the world wide Irish step dancing  sensation Riverdance in the 1990s.  Composer John Williams, famous for his blockbuster movie scores, adapted the song into “Air and Simple Gifts” and performed it with violinist Istzhak Perlman, cellist Yo-Yo Ma, and other world class musicians for President Obama’s first inauguration celebration in 2009.  Oldsmobile used the tune in a television ad for its Aurora sports sedan in the 1990s.  Even young actress Jody Foster performed a version of Simple Gifts for an episode of the popular 1970s television show Kung Fu.  And the list goes on… 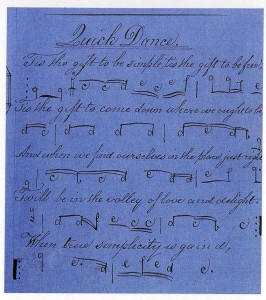 Authentic Shaker music still thrives today in the Shaker Village at Sabbathday Lake, ME, where a small group of Believers have lived consecrated lives since the 1790s.  Even the Shakers themselves recorded their own version of Simple Gifts, one of 40 tunes on their 1976 album by Rounder Records.  Much to the benefit of the World today, Shaker music is no longer exclusive to their communal religious movement alone.

Todd Burdick is the Director of Interpretation & Public Programs at Hancock Shaker Village in Pittsfield MA.