New AASLH Book: Art of the Amistad and the Portrait of Cinqué

New AASLH Book: Art of the Amistad and the Portrait of Cinqué

The Amistad incident, one of the few successful ship revolts in the history of enslavement, has been discussed by historians for decades, even becoming the subject of a Steven Spielberg film in 1997 that brought the story to wide audiences. But while historians have examined the Amistad case for its role in the long history of the Atlantic, the 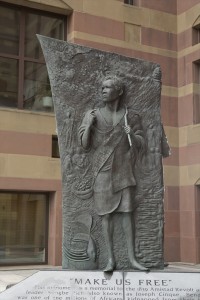 United States and slavery, there is an oil on canvas portrait of one man, Cinqué, at the center of this story—an image so crucial to the continual retelling and memorialization of the Amistad incident, that it is difficult to think about the Amistad and not think of this image.

The Portrait of Cinqué became the primary visual image from which succeeding generations of artists pulled inspiration and form, demonstrating its enduring value. Contemporary sculptor Ed Hamilton, for example, used the portrait and other historic images of the Amistad, such as the Talladega murals from the 1930s, to give shape to the Amistad Memorial, which sits at the façade of City Hall in New Haven, Connecticut and continues to serve as a community gathering place for social justice activism, connecting past to present. Visitors to the city pass by the three-sided memorial, reading the story engraved on 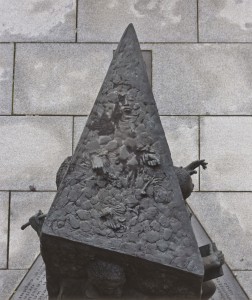 Amistad Memorial, seen from the top

the granite base, yet few realize there is a fourth side to the bronze, a triangular shape at the top unseen from street level, where Hamilton placed the face and hands of a person of color, slipping beneath the waves. The image remembers, perhaps, Foone, one of the Amistad Africans who died—possibly drowning himself—while waiting to return home to Sierra Leone, and also J.M.W. Turner’s powerful Slave Ship (Slavers Throwing Overboard the Dead and Dying—Typhoon Coming On), painted in 1840, during the same year the Amistad Africans were jailed, their case moving through the American judicial system. 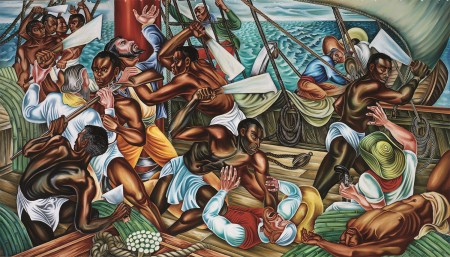 Visual and material culture about the Amistad in the form of paintings, prints, monuments, memorials, museum exhibits, quilts and banners began production in the late summer of 1839 and has not yet ceased.

Art of the Amistad and the Portrait of Cinqué is the first book to survey in total these Amistad-inspired images and related objects, and to find in them not 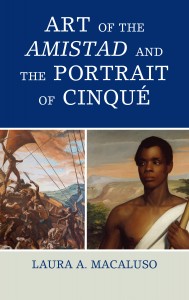 only shared ideals and cultural creations, but also divergent applications of the story based on intended audience and local context.  The book weaves together objects from museum collections large and small, exploring new ways of writing narrative about history and memory-making through the exploration of art and objects.  Art of the Amistad and the Portrait of Cinqué is a new release in the AASLH series at Rowman & Littlefield. Members get 20% off all AASLH books.