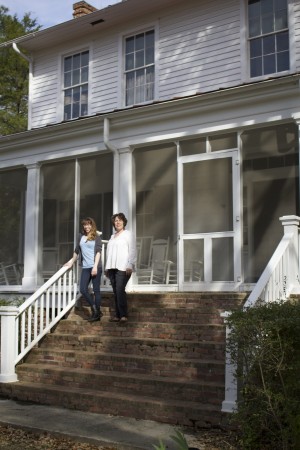 A Boston museum consultant and a West Georgia historian are heading the operations of Andalusia Farm, the final home of author Flannery O’Connor and the inspiration for many of her stories in Milledgeville, GA.

Elizabeth Wylie, a museum professional, art historian, preservationist and sustainability expert, was named executive director of the Flannery O’Connor-Andalusia Foundation and moved from Boston to Milledgeville in January. This year marks the 50th anniversary of O’Connor’s death and she is still regarded as one of the most important literary figures of the 20th century.

Wylie succeeded Craig Amason, the first executive director of the foundation, who successfully began the restoration of the farm in 2001. Amason resigned to take a position as special assistant to the president of Piedmont College in Demorest, Ga.

April Moon Carlson, who holds a master’s degree in Public History from the University of West Georgia and most recently worked with the National Park Service, joined Wylie in March as operations and visitors services manager. Currently, Andalusia Farm welcomes each year approximately 5000 visitors from all over the world and across the U.S.

“Andalusia is a gem and is ready for the next stage of growth,” Wylie said. “The place that inspired so much of Flannery O’Connor’s fiction is still inspirational for so many people today: writers, artists and general visitors from near and far. I am excited to have a full-time team in place and can start to program the spaces — the Hill House and the Cow Barn — that Craig worked to rehabilitate.”

Wylie hopes to develop programs to engage visitors in a variety of experiences that extend from O’Connor outward to include the historic farm operations and nature on the 544 acres of contiguous open space.
Already, she has hosted two farm-to-table dinners prepared by Leon Johnson, an artist from Detroit who is the visiting Newell Scholar at Georgia College, a public liberal arts university located four miles south of Andalusia. Johnson operates the Salt & Cedar letterpress in Detroit and also educates inner city children about healthy eating. “Carlson said, “Andalusia is not only home to one of my favorite authors, but the vast acreage of the site excites me as a native Georgian. I am elated by the opportunity to work to preserve the historical structures that reflect O’Connor’s life in Milledgeville and her stories, along with the conservation of the region’s natural resources.”

Wylie and Carlson also hosted a reception March 25, on what would have been O’Connor’s 89th birthday, for volunteers who have contributed to Andalusia Farm over the years. O’Connor’s favorite dessert was served: peppermint chiffon pie from the recipe of the old Sanford House restaurant, where the author ate almost every day.

ABOUT THE FLANNERY O’CONNOR-ANDALUSIA FOUNDATION
The Foundation is dedicated to the restoration, preservation, and appreciation of Andalusia, the final home of Flannery O’Connor, to perpetuate her place in the roster of great writers of the 20th century.