New-York Historical Society’s Center for the Study of Women’s History is First of Its Kind for a U.S. Museum

New-York Historical Society’s Center for the Study of Women’s History is First of Its Kind for a U.S. Museum

Collection of Tiffany Lamps to be Displayed in a Dazzling Glass Gallery
Center for the Study of Women’s History is First of Its Kind for a U.S. Museum
Permanent Collection Displays to Reimagine Historical Artifacts in Bold New Ways 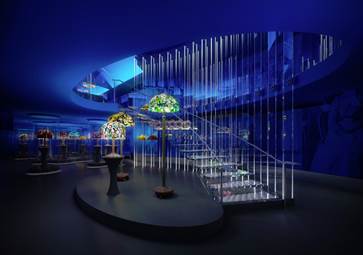 NEW YORK, NY, October 8, 2015 – The New-York Historical Society today shared plans for the transformation of the Henry Luce III Center for the Study of American Culture on the fourth floor of its home on Central Park West, which will be redesigned to feature highlights from its outstanding collection as never before, as well as a groundbreaking new center for scholarship focused on women’s history. The centerpiece of the reimagined fourth floor will be New-York Historical’s preeminent collection of Tiffany lamps, displayed in a sparkling glass gallery designed by architect Eva Jiřičná. The new Center for the Study of Women’s History will be a permanent space devoted to women’s history exhibitions and scholarship—the first of its kind in a U.S. museum. A reimagined display of the permanent collection will increase public access and engagement with New-York Historical’s holdings and bring new artifacts to light. Renovation of the fourth floor has begun and the space is scheduled to open to the public in early 2017.

“The new fourth floor was inspired in part by New-York Historical’s discovery of the secret history of Clara Driscoll and the ‘Tiffany Girls,’ who designed and created many iconic Tiffany lampshades, and whose overlooked contributions offer a window into the history of American women, labor and a changing New York in the late 19th and early 20th centuries, stories that New-York Historical is uniquely capable of sharing with the world and that will come together in this exciting new space,” said Dr. Louise Mirrer, President and CEO of the New-York Historical Society.

Tiffany Gallery
The Tiffany Gallery will be a sparkling glass showcase for the Museum’s renowned collection of lamps by Tiffany Studios, which is among the world’s best in range and quality. Designed by architect Eva Jiřičná in her first major New York project, the 3,000-square-foot, two-story space will feature a dramatic glass staircase. One hundred Tiffany lamps will be on display in the darkened gallery, dramatically lit to allow visitors to experience the glowing lamps as they were intended.

Curated by Margaret K. Hofer, Vice President and Museum Director of the New-York Historical Society, highlights on view will include a Wisteria lamp (ca. 1901), made with nearly 2,000 pieces of glass to portray the cascading blooms; a Magnolia shade (ca. 1910–13), with “drapery” glass that was folded while still molten to capture the fleshy texture of the blossoms; a Cobweb shade on a Narcissus mosaic base (ca. 1902), designed during a period of transition from fuel to electricity and depicting spider webs among the branches of an apple blossom tree; and a Dragonfly shade (ca. 1900–06), one of Tiffany Studios’ most popular designs, featuring dragonflies with brass filigree wings and gleaming glass, jewel eyes.

Special attention will be given to the recently discovered role of Clara Driscoll and her Women’s Glasscutting Department, the actual designers and creators of many popular Tiffany shades, including the Wisteria and Dragonfly. Honoring Driscoll and her team of “Tiffany Girls,” who remained hidden in Louis Tiffany’s shadow until the discovery of Driscoll’s correspondence in 2005, the exhibition will provide a powerful connection to the Center for the Study of Women’s History, also on the fourth floor. The installation will also explore the history of Tiffany Studios, their marketing of luxury goods, the various styles of lighting produced by the firm, and the significant impact of the advent of electricity on the lives of Americans at the turn of the century.

The mezzanine level of the Tiffany Gallery will delve deeper into the making of Tiffany lampshades, from preliminary sketches and design cartoons, to the selection and cutting of glass. The “Design-a-Lamp” interactive will allow visitors to select glass for a Dragonfly shade and see the immediate results on a three-dimensional illuminated model. Visitors will also learn about trademark details that distinguish original Tiffany creations from contemporary Tiffany-style lamps.

Center for the Study of Women’s History
The Center for the Study of Women’s History will be the first of its kind in a U.S. museum to focus on women’s history on a permanent basis, presenting special exhibitions, public and scholarly programs, and an immersive multimedia film. Organized and curated by Valerie Paley, Vice President and Chief Historian of the New-York Historical Society, the Center will feature two to three exhibitions annually in the Joyce B. Cowin Women’s History Gallery, alternating between historical and art-focused installations. Planned exhibitions include an inaugural show on 18th century American women’s role in helping to create the first modern democracy, and an exhibition that focuses on women and the 19th century Progressive movement. A digital interactive wall, Women’s Voices, will explore and contemplate women’s words and actions, and invite visitors to participate in the dialogue by sharing their own stories.

New York Women in a New Light, a 15-minute immersive film created for a new theater space, will sweep visitors into the world of early 20th-century New York and feature the stories of remarkable women like Zora Neale Hurston, Frances Perkins, Eleanor Roosevelt, Margaret Sanger, and Lillian Wald. The narrative will express the lasting impact and profound change affected by New York women. The theater space also will be used for teacher workshops, classes, and small conference gatherings.

The Center for the Study of Women’s History will be a vibrant educational resource for scholars, students, and the public, as well as a venue for discussion and exchange focused on women’s history. The annual Diane L. and Adam E. Max Conference in Women’s History will convene scholars and thinkers to discuss topics concerning women’s issues and their relevance to broader movements. The inaugural conference will take place in March 2016 and will focus on the female-dominated garment industry. Panel discussions will investigate production, shifting workforce demographics, the role of female organizers and labor unions, and the complicated relationships between class, fashion, and consumerism.

Scholarly initiatives will also include three Andrew W. Mellon Fellowships in Women’s History that will enhance New-York Historical’s robust fellowship program. The fellows will develop new exhibitions, organize programs, and pursue relevant materials that will enrich the Museum’s public offerings.  The Center will also co-host an online course on women and work, taught by Columbia University historian Alice Kessler-Harris. In addition, it will develop educational resources and opportunities for K–12 students on-site and online, enabling them to engage with primary sources and curricula focused on the history of women’s labor and social reform in New York.  A mobile app, in development, will offer a walking tour of historical sites in the city that welcomed or excluded women.

Permanent Collection
Transforming the Museum’s former Luce Center, the reimagined display of New-York Historical’s permanent collection highlights will significantly increase public access and engagement with the Museum’s holdings. Organized by a curatorial team under the direction of Margaret K. Hofer, the suite of displays will harness the potential of objects to capture the imagination and illuminate history.  Traditional presentations will be supplemented by interactive technology, allowing visitors to engage with historical narratives from a variety of vantage points.

The North Gallery, a large expanse of the fourth floor, will feature a dynamic display of artifacts and works of art. A series of provocative displays, “Windows onto History,” will showcase object-driven explorations of historical themes. These focused, diorama-like installations will alternate with soaring tower cases with dense displays of objects organized by medium. Featured objects will include the Draft Wheel (ca. 1863), which sparked the Draft Riots of July 1863 in Civil War-torn New York; the tool chest and nearly 300 woodworking tools of Duncan Phyfe (1770–1854), one of the nation’s most celebrated cabinetmakers; and the lone surviving marble survey marker that once marked a Manhattan street intersection, put in place after the Commissioners’ Plan of 1811 established the grid plan that still defines the cityscape today.

Just outside the Tiffany Gallery, the Silver Hall will feature a display of silver and jewelry by the famed retailer Tiffany & Co., founded by Charles Tiffany, the father of Tiffany Studios’ Louis C. Tiffany. Included will be a colossal punch bowl presented in 1913 by Frank Woolworth to Cass Gilbert, architect of the Woolworth Building; a controller handle used by Mayor George McClellan to drive the first subway car in 1904; and a whimsical hot air balloon trophy made in 1907 by a Tiffany & Co. competitor. Opposite the Silver Hall, visitors can view highlights of New-York Historical’s important collection of early American silver, including the earliest surviving New York teapot, made for Elizabeth and Johannes Schuyler in 1695; and the iconic Lewis Fueter salver, presented by Royal Governor William Tryon in 1773. The work of the celebrated colonial Jewish silversmith Myer Myers will be explored through a selection of domestic and ceremonial silver.

The West Gallery will feature an Object Timeline, displaying a chronological feast of objects spanning the 1600s to the present day and combining objects of every media. Visitor-accessible drawers beneath will house related light-sensitive objects such as documents, photographs, and printed materials. Also in the West Gallery will be Collection Concepts, a series of thematic displays exploring topics such as “Health,” “Dining Out,” and “Faith,” through the juxtaposition of objects old and new. In the South Gallery, “Curiosa,” a modern take on the traditional cabinet of curiosities, will display small relics linked to important people, places, and events in American history.