Today’s world is increasingly inundated with new models of mobile devices. This increase of various technological devices prompted the Nomenclature Task Force to think about the terminology for multi-functional mobile devices.

Nomenclature 3.0 provided somewhat sufficient terms in Category 6: Tools & Equipment for Communication yet lacked the seemingly appropriate terminology for these types of devices. When selecting a term in 3.0, multiple terms were available, yet lacked the specificity of the multi-functionality of these devices. For instance, terms were available under the sub-classifications of Data Processing Devices and Telecommunication Devices. When cataloging one of these devices a cataloger may have selected multiple terms such as the primary term, “Processor, Digital Data” and the secondary term “Computer, Digital” – or the tertiary terms “Computer, Handheld” and “Minicomputer.

Let us not forget that a cell phone is no longer just a “Telephone, Cellular” with telecommunication properties. The majority of these objects contain a mobile operating system which enables the object to serve multiple functions. This makes the decision making process on terminology a bit more complex. A cell phone now serves the function of a telephone, camera, computer, gaming device, music player, etc. While the primary purpose of a Smartphone is for telecommunication purposes, the variety of functions lends itself to be a data processing device. In similar respects, electronic readers do not serve the sole purpose for reading. This beckoned several questions on what terms would be added and where to assign new terms in Nomenclature 4.0’s hierarchy. 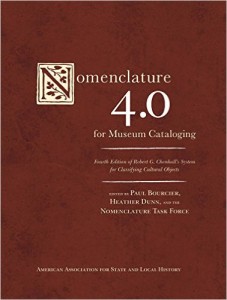 In delving into the research, we found that smartphones were not listed by AAT. However, a multitude of sources referenced objects such as smartphones, computer tablets, electronic readers and much more. The term “smartphone” began its popularity in the mid-1990s with the release of the Simon phone. A multitude of terms for mobile devices are making their way into multiple dictionaries. In combing through the research on multi-functional devices, some of the terms reviewed included “smartphone”, “superphone” and even – “dumbphone!” In all seriousness, it was inevitable that a few terms describing multi-functional mobile devices be added to the lexicon.

Nomenclature 4.0 provides the following new terms “Computer, Tablet,” “Reader, Electronic,” and “Smartphone.” Please refer to the Nomenclature 4.0 Users Guide under Multi-Purpose Objects as well as Textbox 1.2 for more information on how to catalog and cross-index these mobile devices.

As always, after selecting a term – cross-indexing with other terms is always recommended for multi-purpose objects!