“At a time when many historic house museums across the country are experiencing declining visitation, Portland, Oregon’s Pittock Mansion has set a new record for annual visitors. Visitation has steadily grown from 81,000 in fiscal year 2013/2014 to 86,000 in fiscal year 2014/2015 to a new record of 103,000 visitors in fiscal year 2015/2016. The record attendance comes as Board and staff prepare to initiate a new four-year strategic plan which will further enhance the experience of visiting the museum, expand educational programming, and increase community engagement. 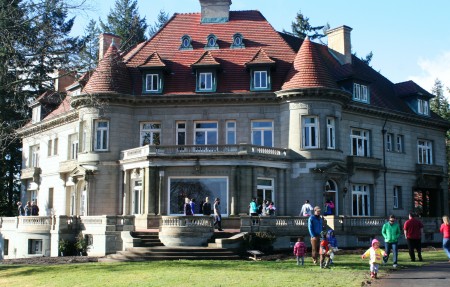 “Reaching 100,000 annual visitors is a notable milestone,” Executive Director Marta Bones stated. “It follows strategic enhancements we made, such as 70 new exhibit panels and 4 interactive stations, in response to visitor surveys, stating they wanted more information and a facilitated self-guided tour.” In addition to further enhancing public program offerings, the Pittock will work with Portland Parks and Recreation to improve access and create a sustainable long-term preservation plan for the buildings.

“We look forward to the continued participation of the Portland community as we continue to share compelling stories that embody the growth, culture, and spirit of Portland,” Bones concluded.

With picture-perfect views of rivers, forests, bridges, and mountaintops — and 23 treasure-filled rooms — no other place in town offers a more breathtaking view and more revealing glimpse of Portland’s past. Portland pioneers Henry and Georgiana Pittock built Pittock Mansion in 1914 and it now stands as a living memorial of the family’s contributions to the blossoming city of Portland and its people. Situated on 46 acres of land almost 1,000 feet atop downtown Portland, the Pittock celebrated its centennial year in 2014.”

Pittock Mansion is located at 3229 N.W. Pittock Drive in Portland, Oregon. It is open to the public daily February through December. For a full list of available tours, upcoming events and activities, and other information, please visit www.pittockmansion.org or call (503) 823-3623.