Posters from the Front and Back

Posters from the Front and Back

I’ve been working with a new acquisition that keeps reminding me why sometimes I practice corporate history, sometimes federal government history, and many times both. As part of the curatorial staff at the Smithsonian’s National Postal Museum, I research and help develop the collection about the postal system. We are just starting to unfold, study, and process twenty posters that we have recently accessioned.

The donation came from a retired postmaster. She tacked them up, as and when instructed from headquarters, in the Palos Heights, Illinois, post office. Some have holes in the corners from use. Most of them were designed for display in post office lobbies. The other seven were intended for the employees in the back workrooms. They all date from between 1974 and 1978. This was a significant period for the relatively new United States Postal Service, which was created through the Postal Reorganization Act of 1970 that transformed the cabinet-level Post Office Department into an independent agency. The U.S. Postal Service initiated a new business model to balance costs and revenue. This model established goals to improve both operations and customer service, and the strategies are evident in these period posters. 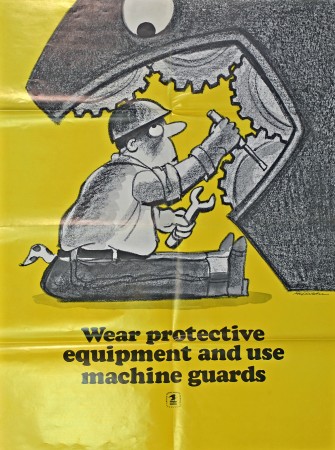 A cautionary cartoon for postal employees.

This poster’s bright yellow background signaled caution to postal employees working behind the scenes. New machinery and facility upgrades were changing the work and staffing of the U.S. Postal Service. The mid-1970s saw substantial investment in mechanization and automation to handle the increased mail volume and to modernize systems. Improving operations also included cost reductions to help achieve the Postal Service’s new financial goal. One of the cost-reduction programs for 1974 and 1975 focused on safety awareness. There was even a selection of posters for this campaign featured in the 1975 annual report along with the statistic that the accident rate was down by 11 percent.

The campaign posters emphasized that accidents could take a personal toll. The “slow down at intersections” poster is not as gruesome as some of the other three that teach driving lessons through limericks. At least this letter carrier seems to survive his scrape with the traffic light: 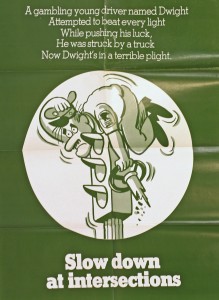 Attempted to beat every light

While pushing his luck,

He was stuck by a truck

Now Dwight’s in a terrible plight.

Safety was no laughing matter for finances or well-being, but the campaign posters in this new accession all used humor to grab the employee’s attention. The cartoon of hazards at the post office apparently never tempted an employee to take up the suggested fun activity to color the poster and it remains pristine. What is tempting to me is the poster’s illustration of sliding down the chute with the mailbags – the fun had by the smiling man whisking down the convey belt might be worth the risk!

Meanwhile, the posters intended for postal customers took a different approach. They are concise and informative – essentially easy to read while waiting in line in the front lobby. They marketed the agency’s expressed goal to improve service, but along with services and new products came price increases. Whether you were a customer or employee, these publications conveyed that the transformation of the Postal Service had created new relationships, responsibilities and ways of doing business. 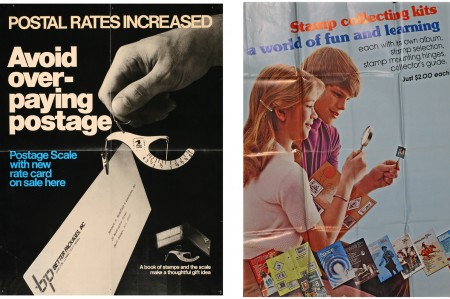 Lynn Heidelbaugh is a curator with the Smithsonian’s National Postal Museum in Washington, D.C.