Earlier this month I visited numerous historical societies and museums in the small towns of south-eastern Idaho.  Each community–Oakley, Malad, and Rigby–had an eclectic collection of hundreds of artifacts, photographs, newspaper clippings, and other documents. Together, these told the history of these communities and their people. 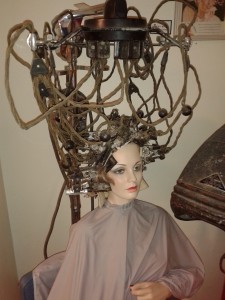 I marveled at the artifacts collected by and donated to these museums. Many were priceless treasures that many large museums would be jealous of. I found myself looking at other artifacts and wondering, “Why would they have that?” (This included what I first assumed was some sort of torture device, but turned out to be an early hair curler). Nestled among these fascinating and odd items were pieces of the religious history of the community.

Artifacts from early religious leaders, building fragments from churches lost to the wrecking ball, and records from local congregations all found a home in these small museums. Aside from the small label sharing a brief description of the item, there was no interpretation which conveyed the significance of these items. Yet, by the mere fact that someone saved and donated these items show that the religious heritage of those in the community was significant and needed to be preserved as part of the towns history.

My trip also took me to two other communities which have preserved their religious history, despite not having a museum. In the small town of Elba, Idaho stands a remnant of its early Mormon roots. A small, one room building, known as a Relief Society hall has been preserved and is maintained as the local community center. (The Relief Society, founded in the 1840s, is the women’s organization of the Mormon Church.) This historic structure, built in 1901, served as the gathering place for Mormon women in the community for many years during the early twentieth 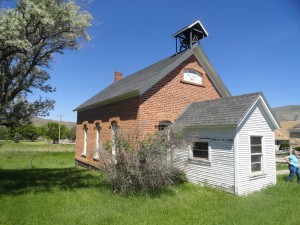 century. Over time the church abandoned or razed many of these Relief Society halls throughout the intermountain west. Today, those that remain were saved thanks to the efforts of local communities like Elba. 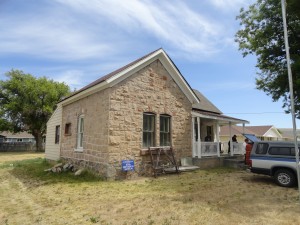 Like the efforts taken in Elba, citizens of Iona, Idaho are proud–and rightfully so–for preserving two ecclesiastical buildings in their community; the rock church and the tithing office. The old rock church, built in the late 1880s, has been transformed into a community art center where, during the summer months, school age children take part in art programs. Their work, along with from the community is displayed in the old church for all to enjoy throughout the year. The old tithing office, across the street from the rock church, is currently being transformed into the home of the local historical society. Although it is only going through a renovation and not a restoration, efforts are being made to keep as many of the historic elements of the building as possible. These historic structures in Elba and Iona have been given a new purpose and have become treasured reminders of the religious heritage of the communities.

Though small in size, each of these communities have taken efforts to preserve all aspects of their heritage, including their religious history.