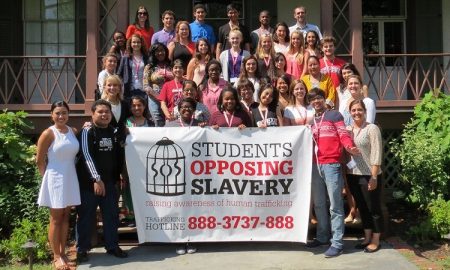 Students Opposing Slavery (SOS), a youth education program of President Lincoln’s Cottage, was awarded the Presidential Award of Extraordinary Efforts to Combat Trafficking in Persons on Monday, October 24th, 2016 at the meeting of the President’s Interagency Task Force to Monitor and Combat Trafficking in Persons at the White House (see video coverage of the meeting). The award, presented by Secretary of State John Kerry, was accepted by three students, Daniel Becker, Courtney McCrimmon and Beatrice Greeson, representing all SOS participants. President Lincoln’s Cottage CEO, Erin Mast and Associate Director for Programs, Callie Hawkins were also present for the ceremony.

Founded by students in 2012, SOS is a network committed to empowering youth leaders and raising awareness about human trafficking among young people—one of the demographic groups most vulnerable to human trafficking. President Lincoln’s Cottage, located in Northwest Washington, D.C. adopted the program in 2013 and established the annual SOS International Summit, a signature, award-winning program. Over the past four years, President Lincoln’s Cottage has hosted 110 participants from across the United States as well as 16 other countries spanning five continents at the multi-day summit.

In his remarks, Secretary Kerry described the “student-led network committed to empowering young leaders’ awareness [of] how to stop trafficking” as “pioneering an innovative movement.” While only four years old, SOS boasts a growing network of youth abolitionists in active SOS chapters around the globe: American chapters stretch from Washington, D.C. to Washington state, and international chapters bridge Moldova to Myanmar. The program was recently honored with the prestigious EdCom award from the American Alliance of Museums and an award of merit from the American Association for State and Local History.

“This is a powerful recognition and platform for the work of SOS,” Dr. Jean Baderschneider, Board Member of President Lincoln’s Cottage, explained. “With the home of the Emancipation Proclamation as its base, SOS is creating a global network of young abolitionists fighting modern day slavery. These students are building a movement for freedom from the ground up, starting in their schools and communities. This honor will, no doubt, inspire them to go further.”

Ms. Mast described SOS as, “mission-critical to President Lincoln’s Cottage’s purpose of serving as a ‘Home for Brave Ideas.’” She continued, “Abraham Lincoln’s ideas and policies on emancipation were shaped here at the Cottage. Over 150 years later, his vision of a nation without slavery has not yet been realized. These students are working to end this injustice. This impact this recognition will have on their work cannot be overstated. It’s a great honor.”

The Presidential Award for Extraordinary Efforts to Combat Trafficking in Persons is given out once a year to outstanding individuals or organizations that display a steadfast commitment to fight against modern slavery.