Protecting the Legacy: Documenting Political Activity of African American Women in Tennessee Prior to 1930

Protecting the Legacy: Documenting Political Activity of African American Women in Tennessee Prior to 1930 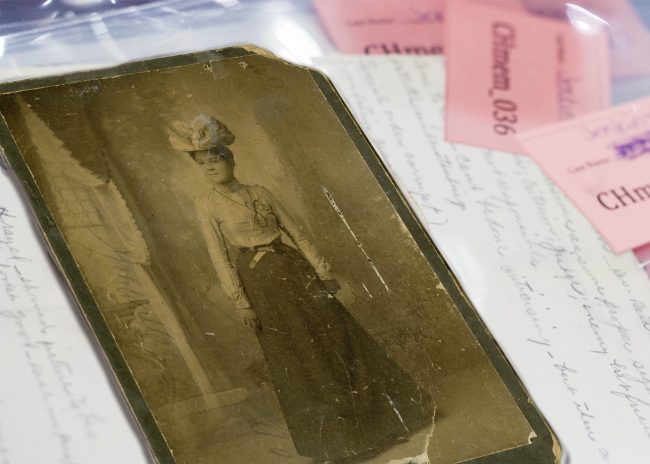 Two years ago, Chick History launched March to the 19th  — in partnership with Humanities Tennessee — a grassroots campaign for women’s history leading up to 2020 and the centennial celebration of the 19th Amendment. Since launching, we’ve been traveling across Tennessee and engaging with various audiences to achieve our goals for this campaign and address some critical needs for women’s history, such as professional development and educational resources.

Last year, we began a phase called Protecting the Legacy. Together with a coalition of history partners across the state, we are digitizing family and local history related to African American women’s political history in Tennessee before 1930. This is an effort to expand the narrative of suffrage, voting, and political activity; and to preserve the contributions and experiences of African American women during this time period in Tennessee. At a series of Digitization Events being held across the state, we are asking the public to bring in family and community history to be digitized and preserved.

How do you document the political activity of African American women?

This is the driving question behind Protecting the Legacy, and one a statewide task force spent almost a year discussing and creating a collection methodology and subject-matter scope. Much of the conversation centered around the fact that if the project focused specifically on suffrage, the many ways in which African American women were politically active during segregation would be missed.

It was important for the project team that segregation was our starting point, not the end point. As Dr. Earnestine Jenkins, a professor of art history in the department of art at the University of Memphis and the humanities scholar for Protecting the Legacy says, “The traditional narrative does often leave out large groups of women who don’t fit into the white, middle-class story of women’s rights. You have to be honest about the racism in the movement and the extent they kept women of color out of the movement. … You have to look for those hidden histories because, otherwise, you are not going to get it.”

For the project, that means looking for old newspapers or church programs with meeting notices for the local chapters of the National Association of Colored Women’s Clubs. It means digging through old photographs for pictures of women who were active in the community and church. It means looking differently at letters, journals, or everyday material long stashed away in an attic, and rethinking the sense of community history, and what it means for an African American woman to be politically active during that time period. 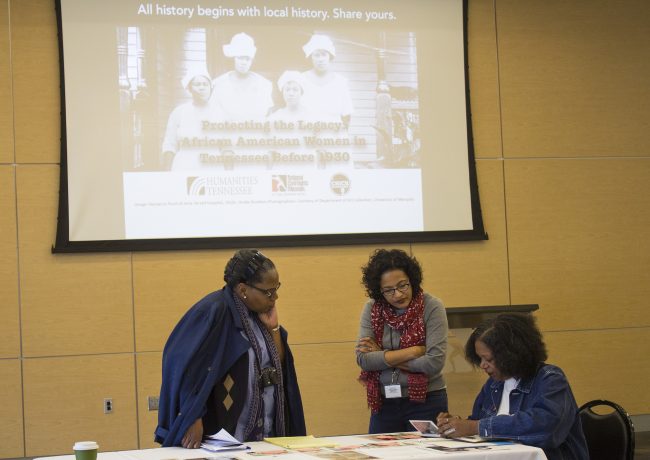 Members of the project team look over photographs brought in by a participant, November 2017.

The first digitization event, held at the National Civil Rights Museum in Memphis, Tennessee, in November 2017, yielded a new archive of dozens of items, including interviews with several African American women in their mid-nineties. Among the rare and important findings is a studio portrait of Annie Sybil Thomas Jarret taken by pioneering photographer James P. Newton, the first professional black photographer in Memphis who operated a studio on Beale Street.

Newton photographs are extremely rare, and this portrait of Annie Jarret is just one of the ways African American women expressed political activity. Imagery played a critical role in crafting the visual stereotypes that developed alongside the rise of segregation and racial subordination.

To counter politically-motivated racist imagery, photographers like Newton were central to visually documenting the achievements of black Americans like Annie Sybil Thomas Jarret and transforming the visual representation of African Americans as they strived for full citizenship and political enfranchisement. Annie Sybil Thomas Jarret was an educator and among the first generation of African American woman voters in Tennessee.

Women as everyday archivists of their family and community history.

Annie Jarret’s photograph is just one of the histories we hope to discover and preserve with this project. The existence of the photograph in a family collection serves as a poignant reminder that our personal family histories are inevitably part of something bigger and worthy of preservation. It also demonstrates the urgent need to capture these local histories before they are lost.

To learn more about the project, visit: www.protect.chickhistory.org.