Recognizing the Rainbow: The National Park Service’s Quest to Include LGBTQ Americans in Telling All Americans’ Stories

Recognizing the Rainbow: The National Park Service’s Quest to Include LGBTQ Americans in Telling All Americans’ Stories 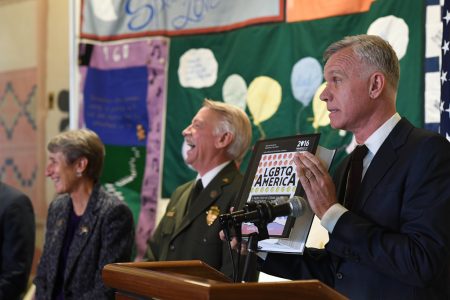 Tim Gill, founder of the Gill Foundation, holds up a copy of the 1200 page theme study at the launch party on October 11, 2016. Photo by the US Department of Interior, CC BY-SA 2.0

I stood at the penthouse balcony of the Department of the Interior and gazed out at the Washington Monument, bathed in the fading light of the October sun. It was National Coming Out Day (October 11), an appropriate occasion for the National Park Service to release the first federally commissioned document to openly validate and study the lives of gender and sexual minorities in the United States. A crowd gathered indoors as the Secretary of the Interior, Sally Jewell, spoke about the significance of LGBTQ America: A Theme Study of Lesbian, Gay, Bisexual, Transgender, and Queer History. A collaborative effort on behalf of the National Park Service (NPS), National Park Foundation, and Department of the Interior, this document was made possible by historians, archivists, museum professionals, geographers, historic preservationists, historical archaeologists, and many others.

While not involved in the creation of the theme study, I had recently joined the National Park Service as a Resident Fellow and was offered the opportunity to produce interpretive programming based on this enormous 32-chapter document. As a PhD candidate in public history at Middle Tennessee State University, I was trained to interpret academic material for a public audience – but 1200 pages is a lot! Plus, communicating the nuances of gender and sexuality throughout American history can be rather complex. Needless to say, as others around me rejoiced at the release of the theme study, I wondered what I had truly gotten myself into. Yet as I witnessed the people around me laugh, cry, and celebrate the occasion, I understood that this moment was about more than the publication of a document. It was about recognizing and preserving the stories of those who had long been excluded from public memory, and I felt honored to share this message with the public, no matter how challenging the task. 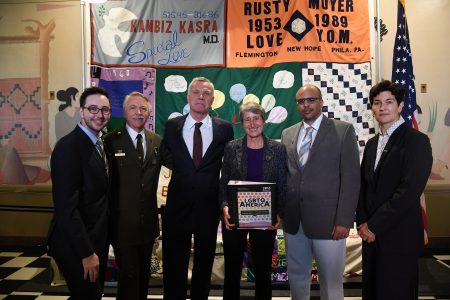 In the weeks after the release of the theme study, I and the other members of the Cultural Resources Office of Interpretation and Education brainstormed ways to disseminate the knowledge from LGBTQ America. Inspired by some extraordinary high-schoolers in the Washington, D.C. area, a product called “The Pride Guide: Discovering, Exploring, and Creating LGBTQ Spaces” is currently in the works. This guide provides a summary of each chapter of the theme study as well as an overview of all six sections with discussion questions, activities, and field trips included. The goal is to get young people out in their communities to identify potential LGBTQ places.

The effort to interpret the theme study is part of a larger trend toward inclusion within the National Park Service. As America’s storyteller, the NPS has been entrusted by the American people with over 400 sites since its founding in 1916. Many parks have recently made efforts to identify and interpret the excluded stories within their units. In addition, the 2016 centennial prompted the entirety of the National Park Service to commit to another century of stewardship by telling all Americans’ stories. 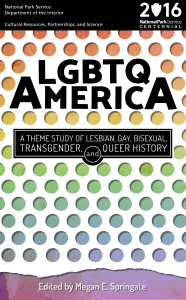 Tangible examples of the National Park Service efforts toward greater representation include the creation of heritage initiatives, theme studies , and more inclusive interpretation. To designate more diverse properties, the National Park Service has identified several heritage groups, including women, American Latinos/as (a theme study was completed in 2013), Asian American Pacific Islanders (a theme study is scheduled to be released in 2017), and LGBTQ Americans.

One of the challenges particular to the study of LGBTQ history is the lack of attention to lesbian, gay, bisexual, transgender, and queer contributions, which stems in part from the “invisibility” of such citizens. Some LGBTQ scholars argue that these enclaves were never invisible (heterosexual society ignored and/or erased their existence from historical memory). However, there was certainly a stigma associated with homosexuality throughout American history. This forced many who engaged in same-sex behavior to hide or erase it from historical records. Thus, few texts document the history of homosexual love and desire. Instead, scholars must rely on “non-traditional” sources, such as oral histories, music, art, and built landscapes, in order to accurately reconstruct LGBTQ history.

With its unique focus on the power of place, the theme study reveals that LGBTQ history is not a specific category or sub-genre of history. Instead, LGBTQ history is American history. Many of the people, places, and events important to our historical consciousness are directly and indirectly connected to LGBTQ individuals, movements, and communities. This history intertwines with the larger historical narrative of our country, yet these contributions are rarely identified as LGBTQ.

LGBTQ America also touches on the tendency to impose modern conceptions of sexuality and gender on people from the past. Identifying queer behavior throughout American history is difficult particularly when studying groups with a long history of subjugation. When Europeans encountered Native peoples in North America, for example, they incorrectly identified seemingly queer individuals as “hermaphrodites” or “berdache.” These terms obscure modern studies of indigenous tribes and how they understood gender and sexuality. In recent decades, Native Americans have reclaimed their past and currently use the term “two-spirit” to refer to individuals who cross or merge the traditional male and female roles (see Chapter 9 of the theme study). LGBTQ history is filled with similar examples of queer individuals seeking to reconcile and assert their gender and sexual preferences within the larger heterosexual society. 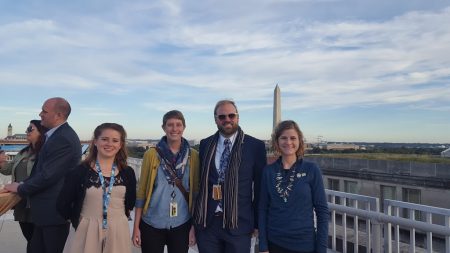 Members of the NPS’s Cultural Resources Office of Interpretation and Education pose for a photo at the Department of the Interior. From left to right, Katie Crawford-Lackey, Beth Pruitt, William Arey, and Katie Orr (missing Barbara Little, Paloma Bolasny and Megan Springate). Photo courtesy of Katie Orr.

Thus, the publication of LGBTQ America is a critical first step in the reclamation of queer identity. The theme study helps identify and preserve LGBTQ related places in order to enrich and enhance the public’s understanding of our shared history as a nation. By documenting and protecting these sites, the National Park Service sends the message that LGBTQ people and their histories are important. I encourage you to get involved by reading the theme study and identifying LGBTQ places near you. As you scan through the chapters, you may notice several critical themes:

Disseminating the knowledge from the theme study remains a continuous challenge, one that will never fully be complete. Despite the obstacles that lay ahead, I am optimistic about the potential of this document. LGBTQ America: A Theme Study of Lesbian, Gay, Bisexual, Transgender, and Queer History illustrates that queer people and places exist in all parts of the country. Highlighting the interconnectedness of all Americans, the theme study reminds us that through our collective efforts, we all have the power and responsibility to create a more inclusive national narrative that recognizes and celebrates all people. 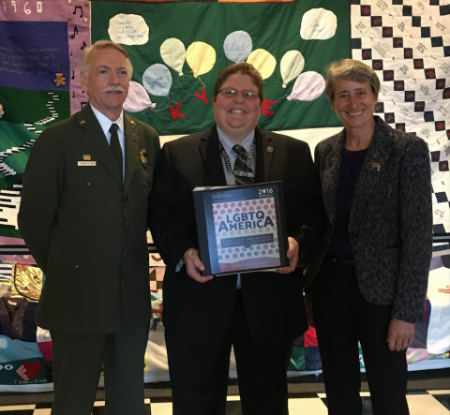 Also check out Interpreting LGBT History at Museums and Historic Sites, the award winning AASLH Series book by Sue Ferentinos, who was a contributor to the LGBTQ Theme Study.