Soda, pop, or coke? Shopping cart or buggy? At one point or another, we have all come across regional language differences.

I grew up in an Appalachian area where my knitted winter cap was referred to as a toboggan. As an adult living in a mid-western plains state, my reference to my hat as a toboggan surely raises some eyebrows! My husband often jokingly reminds me that “A toboggan is something you ride. Your hat is called a stocking cap.” Last year in defense of my regional language, I made a social media plea for reassurance that I was not alone in my winter vocabulary. Surely, I was not the only one to refer to my winter hat as a toboggan. 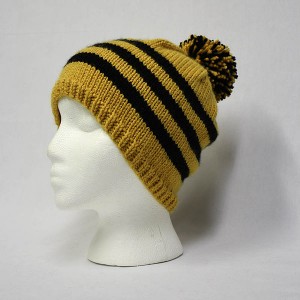 The responses were varied, yet inevitably confirmed the regional differences. After dabbling in some research on this type of object, I have also learned this type of hat may be referred to as a beanie, sherpa, tuque and/or bobble hat. Sometimes the term varies depending upon whether or not that decorative pom-pom is at the top of the headwear. These natural regional differences have emerged due to the varied types of English. My beloved term “toboggan” is most prevalent in Southern American English, yet there is still a wide range of variance!

My personal terminology of referring to it as a toboggan will most likely never change, yet when cataloging this type of object it is imperative to conceptually look beyond the scope of regional terminology. It is important to remember that as catalogers (individuals) our backgrounds may sway our thought process to initially think of regional terms. I recently presented a session at my state museum conference where I briefly mentioned regional terminology and this example. At the conclusion of the presentation, a colleague originally from Arkansas agreed with my reference to a hat as a toboggan. So, it is vital that we remind ourselves to look at the broader aspect of the object to find the most preferred and/or appropriate term.

Naturally, some museums will embrace more regional and/or ethnic terminology. While it is not entirely wrong to divert from the standard Nomenclature terms, it may make the process of sharing data a more difficult process. Nomenclature suggests that non-standard terms be placed in an alternate name field. By adding the text to alternate fields, query results may yield the regional terms without altering the lexicon.