Remembering the Journey, Not Just the Destination: A Call for Continued Preservation of the Roadside Aesthetic

Remembering the Journey, Not Just the Destination: A Call for Continued Preservation of the Roadside Aesthetic

This blog was originally published by the Center for Historic Preservation at Middle Tennessee State University on October 25, 2017. 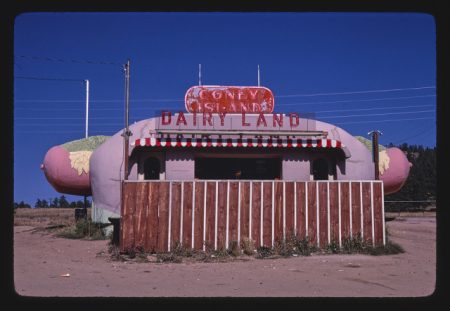 John Margolies, 1980. Courtesy of the Library of Congress.

How far removed from the past do we as historians have to be in order to consider a topic viable as history? I ask mostly in terms of the recent past. While some of my colleagues focus on the Early Republic or Civil War periods of U.S. history, I look at the recent past. My dissertation focuses on roller skating rinks during the post-World War II era. To prepare for this research, one of my doctoral qualifying exams was about the American recent past, particularly the architecture of the recent past.

Mirroring the larger field of history, the field of historic preservation has made great strides over the past fifty years, widening its focus beyond the “great men” of the past and their homes. Vernacular architecture is now prominent in the field. However, there are still some areas in which historic preservation is not as strong as it could be. One of these is the study and preservation of commercial, roadside architecture. While there are several examples listed on the National Register of Historic Places (such as the “Big Duck” in Long Island, New York, which was added to the National Register in 1997), the roadside architecture of the recent past is increasingly threatened by demolition, dilapidation, and neglect. 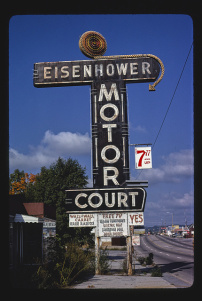 John Margolies, 1979. Courtesy of the Library of Congress.

In Main Street to Miracle Mile: American Roadside Architecture (1995), Charles Liebs details the development of the commercial strip in America and the various buildings and structures found within it. Similarly, in Remembering Roadside America: Preserving the Recent Past as Landscape and Place (2011), cultural geographers John A. Jackle and Keith A. Sculle look at how “automobility” directly influenced the architecture and culture that grew on the roadside. This included the development of motor courts and motels, diners and fast food restaurants, gas stations and car repair shops, as well as drive-in theaters and miniature golf courses.

The roadside gave rise to a unique phenomenon—developers and builders had to produce structures that became ideal for the “windshield movie,” as Liebs characterizes it. This led to the development of two unique styles of roadside architecture, as detailed by Robert Venturi, Denise Scott Brown, and Steven Izenour in Learning From Las Vegas (1977): “ducks” and “decorated sheds.” Basically, “ducks” are buildings that are themselves symbols, and “decorated sheds” are buildings that have symbols applied to them, whether in the form of signage or ornament. Roadside architecture is filled with both ducks and decorated sheds, often eye-catching for their twenty-second appearances in the “windshield movie.” Nostalgia is often attached to the roadside, with people fondly drawing on memories of stops made during family road trips, when the journey was just as significant as the destination. 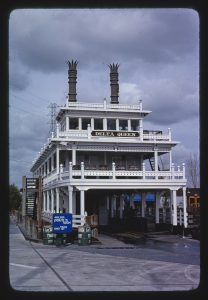 John Margolies, 1978. Courtesy of the Library of Congress.

If roadside architecture conjures up nostalgic memories and highlights the history of the automobile within the United States, then why is it being preserved at such a slow rate? One answer is the ephemeral nature of the buildings. As Liebs suggests, roadside architecture was not like other forms of architecture; it was commercial in nature and had to adapt to changing tastes and styles to remain relevant and maintain an “up-to-date sales costume.” This constant face-lifting of the roadside proves challenging when attempting to nominate a building to the National Register, which promotes the continuous integrity of buildings. Likewise, geographers Jackle and Sculle write that this subset of buildings was often constructed with “little if any pretense to permanence.”

In essence, most roadside structures were not built with the expectation that they would last a long time. Another issue with the preservation of roadside architecture is that it was simply forgotten with the advent of the interstate system in 1956, which allowed travelers to bypass older highways and byways. I am of the opinion that interstate travel is far more concerned with the destination than the journey. Yet another possibility is that roadside architecture represents a past that is seen as unimportant, and so these structures are simply torn down to make way for the new.

Groups and individuals have taken steps to preserve the roadside. The Society for Commercial Archeology was established in 1977 and advocates for the preservation of America’s twentieth-century commercial architecture. Beginning in the 1970s, John Margolies (1940—2016) took it upon himself to begin photographing the commercial vernacular architecture across the United States, visiting all 48 contiguous states and capturing thousands of images of the roadside aesthetic that was quickly beginning to disappear. Margolies’s images even served to help place some buildings on the National Register beginning in the 1970s. His photograph collections can be found at the Library of Congress, with more than 11,000 color slides, and at the Henry Ford Museum, which also holds a material culture collection Margolies accrued on his cross-country road trips. Additionally, historians, preservationists, architects, and geographers are increasingly writing about the roadside. 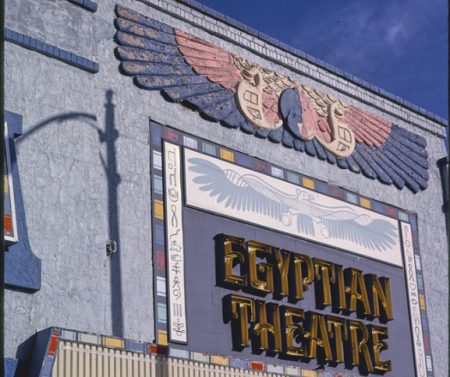 John Margolies, 1991. Courtesy of the Library of Congress.

With the preservation of any architectural form, we cannot let some success keep us from pushing forward. The roadside aesthetic is uniquely American, and as such, let us remember and appreciate the journey the roadside has provided by preserving and protecting what remains.

John A. Jackle and Keith A. Sculle, Remembering Roadside America: Preserving the Recent Past as Landscape and Place (Knoxville, TN: University of Tennessee Press, 2011), p. 4.

John Margolies, Roadside America: Architectural Relics from a Vanishing Past, edited by Jim Heimann with an introduction by C. Ford Peatross and Phil Patton (Kӧln: Taschen, 2010).