Research Brief: What a New Report Reveals about History in American Life 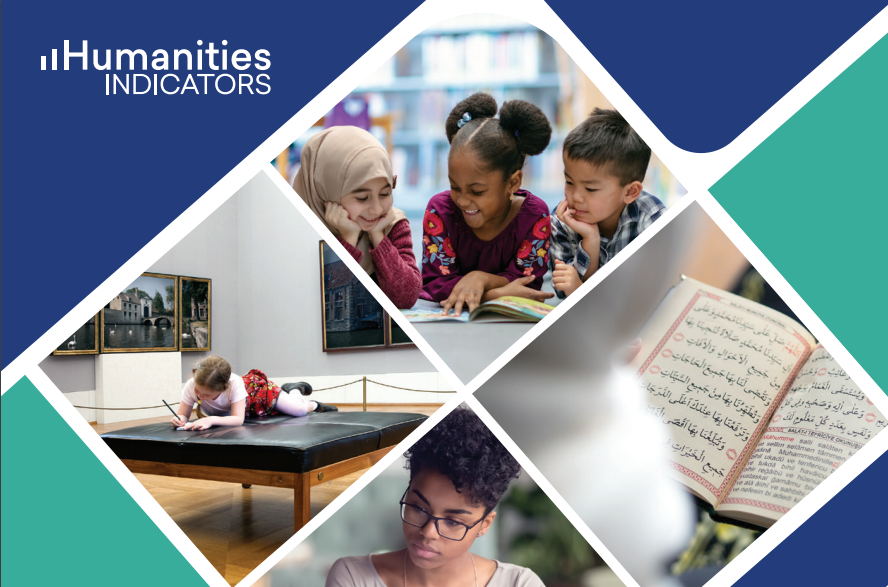 Late last year, the Humanities Indicators Project of the American Academy of Arts and Sciences published The Humanities in American Life, a groundbreaking new report on Americans’ attitudes towards and engagement with the humanities. Based on a nationally representative survey fielded in fall 2019, the survey asked more than five thousand American adults about “their beliefs about the personal, societal, and economic benefits of the humanities” and when and where they engaged with the humanities and its constituent disciplines. By teasing out Americans’ perceptions of and engagement with history, literature, philosophy, foreign language, and other humanities disciplines—as well as the humanities as a whole—the report reveals in new ways where history stands with the public. As such, its findings have significant implications for public history professionals, historians, and others involved in interpreting and sharing the past.

The report makes clear that for most Americans, history stands apart as unique from the rest of the humanities in both its popularity and perceived importance.

Favorable views of history were also reflected in the report’s assessment of how Americans engaged with the humanities in their daily lives—where history activities topped the list. 83 percent of respondents reported that they had “watched a show with historical content” at least “sometimes” in the prior 12 months, making it the most popular form of humanities engagement by a sizable margin. History-related shows also were much more popular than shows focused on other humanities content: 46 percent of Americans either “often” or “very often” watched shows with historical content, while only 18 percent watched shows with other humanities content. History shows attracted more men than women, and older Americans were more likely to watch history shows than young ones. The report also found that 69 percent of Americans had at least sometimes “researched the history of something of interest online,” while only 13 percent of Americans reported they never did so. Like for watching shows, “history was the most popular humanities subject for internet research.” 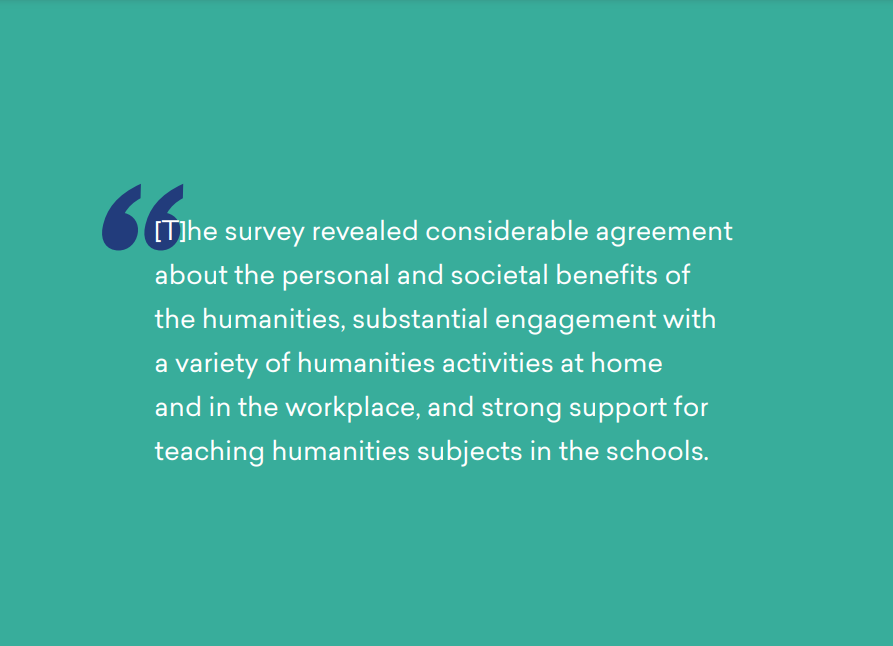 Activities that required leaving home generated lower levels of engagement; yet here too, history-related activity fared better than activities related to other humanities disciplines. 47 percent reported that they had visited history museums or historic sites at least “sometimes” in the previous year, while just 40 percent reported at least sometimes visiting an “art museum, art festival, or art appreciation event” and only 16 percent attended a literary or poetry event. Americans with household income above $125,000 and Americans with a bachelor’s degree or higher were more likely to visit history museums and historic sites than those with lower income or less education.

History was unique as well for its appeal across the political spectrum. “History” was the only humanities term viewed favorably by a majority of both self-reported liberals and conservatives. In contrast, liberals were twice as likely as conservatives (51 percent to 24 percent) to be “fans” of the humanities (as opposed to “neutral” or “skeptics”). Additionally, conservatives are considerably more likely than liberals or moderates to wish they had taken more classes in American history. While 44 percent of conservatives wish they had taken more courses, only about 30 percent of liberals and moderates felt the same way.

With partisan discord more pronounced than any time in recent memory—and despite the ways history functioned as a political lightning rod in 2020—such findings suggest there is at least some degree of unity when it comes to appreciation of and support for history.

Although a wide range of Americans regularly choose to engage with history (and do so more frequently than they engage with other humanities disciplines), the report also reveals that Americans’ engagement with the humanities “tended to cluster by mode of engagement…rather than by the substance or content of that engagement.” Although most Americans engage in multiple humanities-related activities in a year, those activities tend to be of the same mode (such as online research, reading books, or visiting institutions) rather than by the substance of the content (history, literature, religion, etc.). This finding is critical: although Americans may prefer history content within a given format, that preference is not likely to drive them to engage with our work and our institutions in other ways.

This seems to be among the report’s most crucial takeaways for historians and history professionals. The people who enjoy watching history videos, television shows, or films may not be the same ones who enjoy visiting museums and historic sites in person. Audience members who read history books may not be the ones who research with your institution’s online collections. These findings seem simultaneously to be both a boon to the field and a significant challenge. On the one hand, there is a substantial demand for history-related content, and the lack of overlap between different modes of history engagement could mean our total audience may be bigger than many of us realized. History in all of its various forms is popular among a broad segment of the population, eliminating a barrier to engagement encountered by public humanities professionals focused on other disciplines. On the other hand, audience engagement siloed by format rather than content seems to demand that our institutions be everywhere at once—videos, books, public programs, online platforms—to take full advantage. At the very least, Americans’ preference for particular modes of engagement forces us to recognize that choosing in-person programming over print publication over online media means choosing one audience over another. The Humanities in American Life report helps us see that more clearly and enables us to better understand who those different audiences are likely to be.

The report has far more detail on the topics above, as well as additional sections on history and humanities education among children and college students and the uses of history and humanities in adults’ work lives. Throughout the report there are fascinating breakdowns by gender, age, income level, education level, and political affiliation. As historical organizations grow in their ability to make data-informed decisions to most effectively plan and carry out their missions, Humanities in American Life is a necessary addition to our toolkit.

Click here to view the full report from the Humanities Indicators Project of the American Academy of Arts & Sciences.