Time is winding down to #AASLH2015! I could go on and on about how excited I am about the professional development opportunities that await us (have you seen the session line-up for this year!?—it’s fantastic!).

Or, I could enthuse about all of the great sites we will be visiting while in Kentucky—Churchill Downs, the Louisville Slugger Museum, and the Evan Williams Distillery to name just three of the many places we’ll have the chance to visit.

Or, I could tell you all about how I am excited to hear Sam Wineburg’s keynote address. I read his book when I was considering a move into the history field and it single-handedly excited me about the enriching potentials of history. Maybe he’ll sign my book!

Or, I could go on and on about how excited I am to visit the hometown of Muhammad Ali—one of America’s finest athletes, perhaps the world’s greatest boxer, and a darn fine poet to boot.

But, what I want to talk about is something that maybe nobody has ever talked about in an AASLH blog before—Running! 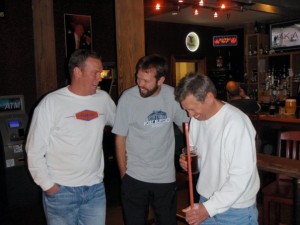 On Saturday morning from 7-9am is the New! AASLH 5K Fun Run! To say that I’m excited for that fun run would be a bit of an understatement!

I’ve run at all of AASLH Conferences that I’ve attended and it’s always added that something special to a week of networking and professional development.

I remember in Salt Lake City, in 2012, on Saturday afternoon, after things had wrapped up, lacing up my running shoes and heading into the hills east of the city. The hills were big and the run was a challenge, but once on top, looking back on a city that I had just met, and thinking of the new friends, colleagues, and knowledge that I would be bringing back home was a beautiful cap to a great week.

In 2013, we were in Birmingham. I awoke that first morning and headed out into a city that I hadn’t yet met, but was excited to get to know. I planned my route to pass the 16th Street Baptist Church. As I neared the church, I looked to the basement windows where those beautiful young girls were at one moment laughing and enjoying each other and in the next moment were denied long and fulfilling lives by the cruel ugliness of hatred and ignorance. I kept running.

In 2014, in St. Paul, I ran across the Mississippi River. Although this time I wasn’t alone! A small group of us congregated in the hotel lobby and trotted out across and then up the bank of the river. It was a perfect run—full of laughing, sharing of ideas, and shared reflection. At the end, we determined that we should do it again—and that’s why I am so excited to see the “AASLH 5K Fun Run!” on the schedule for 2015!

I hope you register! I look forward to meeting you! Running with you! And meeting Louisville in a way that I know is only possible on foot!

Mark Sundlov is Department Manager of the Local History Office at the Ohio History Connection in Columbus, OH. He is also a member of the 2015 Program Committee.