Should We Create the Same Digital Archives for Different Audiences?

Should We Create the Same Digital Archives for Different Audiences?

As a part-time history Ph.D. student embarking on my dissertation (while working full-time at Ford’s Theatre—indeed, I don’t sleep much), few things thrill me more than searching for digitized primary sources.

I tend to use loose search terms, as I know that many digitized collections have minimal metadata, and then sort through the results manually to find what I need.

Wearing either my academic or my museum professional hat, I’m the not-oft-stated but oft-implied audience for many collections databases. My many, many, many years of training (I’m in something like 23rd grade) have prepared me to separate the wheat from the chaff.

But what of users who haven’t gone through years of professional history and museum training, like K-12 teachers? Should we expect them to use an online archive in the same way?

This was perhaps the biggest lesson that became clear to us at Ford’s Theatre as we planned our Remembering Lincoln Digital Collection, which launched in March 2015. After we identified four (in hindsight, overly broad) target audiences during the course of a planning meeting (teachers, students, enthusiasts and scholars), we began an audience evaluation process led by Conny Graft.

Both during the planning process and after launch, Ford’s Theatre conducted videoconference focus groups with teachers, enthusiasts and recent museum visitors.

We conducted focus groups with teachers and enthusiasts, and surveys of teachers, enthusiasts and scholars.

Do busy teachers have the same interest that researchers like me do in sorting through reams of lightly-interpreted primary sources to find the right ones for their classes?

As they told us, and as research efforts by the Minnesota Historical Society have shown as well, not so much.

Rather, teachers understandably don’t have time to sift, and also indicated that they prefer for a subject expert to give recommendations.

So pursuant to this, we made sure that the website includes several features that add interpretation and context—something that took a lot of extra work, but that we would argue is worth the effort.

There is an interpretive section of the website, with a timeline (not always the best interpretive method, but in this case, a way to show events and related primary sources in time), a map that displays a selection of primary sources, and short biographies of featured people.

We have a set of thematic “curated collections” to give another entry point.

We worked with a group of teachers to create teaching modules—the teachers told us that they trusted lesson plans created by their fellow professionals, and not as much by museum staff.

We’ve also used a tagging system, which has sometimes broken down in spite of efforts to maintain a controlled vocabulary. We’re working with our web developer on replacing a free tagging system with check boxes.

We’ve also started working with classrooms on transcriptions, since many of the items in Remembering Lincoln are as yet un-transcribed.

We’ve also encouraged—not always successfully—our contributing institutions to add rich descriptions to their items. In a focus group after launch, teachers indicated a strong preference for items with more interpretation. 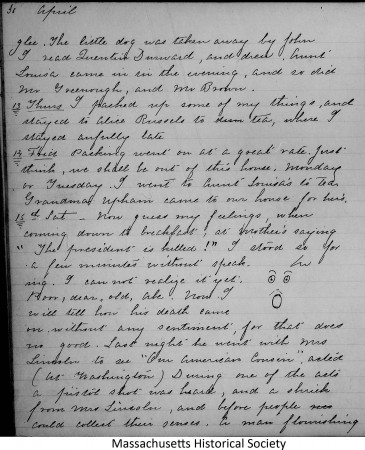 Diary of Sarah Gooll Putnam, a teenager living in Boston who drew the look on her face when her father told her of Lincoln’s assassination. As an adult, Putnam was a portrait painter. Massachusetts Historical Society.

In the future, we’ll likely be going back to add richer metadata.

An important point about adding richer metadata: It takes a lot of time and counters the notion of “more product, less process” that is prevalent in archival work today. Instead of what others have told me is an average of 20-30 minutes per item, Jessica Ellison at the Minnesota Historical Society, who is preparing sets of richly-described primary sources for teachers, tells me she spends one to two hours per item, depending on how much research she needs to do.

But as Mike Lesperance, a principal at exhibition development firm The Design Minds (disclosure: where I formerly worked), put it to me in a recent conversation, interpreting collections items in this way is making them intellectually accessible to broader audiences. Isn’t that what we are supposed to do as educators?

In addition to curated sets of primary sources and rich metadata, our research and that of others also indicate that teachers are looking for variety.

This is one of the unresolved questions that we still have with Remembering Lincoln. In our collecting—not nearly finished (so if your institution has materials, please let me know!)—we have aimed, not always successfully, for geographic and ethnic diversity. Indeed, in the extensive audience research and interpretation process, building the collection was one of the aspects that suffered, although we have 693 items as of May 31.

Still, how do we reconcile the desire for a larger variety of items with the desire for a more curated focus? We haven’t quite cracked that nut. Any suggestions from others in the field are appreciated!

David McKenzie is Associate Director for Digital Resources in the Education Department at Ford’s Theatre. He also is currently a part-time History Ph.D. student at George Mason University, studying 19th-century U.S. and Latin American history, as well as digital history. Before coming to Ford’s in October 2013, he worked at the Jewish Historical Society of Greater Washington, The Design Minds, Inc. and the Alamo. Follow him on Twitter @dpmckenzie.