Souvenirs: How Nomenclature 3.0 Helped Make Sense of My Personal Collection

Souvenirs: How Nomenclature 3.0 Helped Make Sense of My Personal Collection 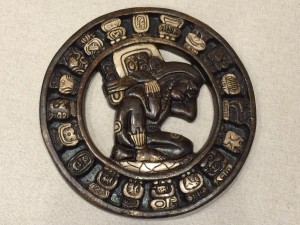 When I was a graduate student in museum studies, my class was assigned what should have been an easy project. We were told to bring our personal collections into class to talk about the objects and the act of collecting as a kind of show and tell. This was supposed to be a fun, light hearted assignment but for someone who never considered herself a collector of anything, I was alarmed. I could almost feel my A grade slipping away as I rushed home to start pulling together anything and everything from around the house that I might use to quickly fabricate an assignment-worthy personal collection.

As I dug through boxes and willed a collection to appear before me, the first thing I grabbed was the Harley Davidson gas tank given to me as a farewell gift from my co-workers at the Harley Davidson Museum. It looked cool and I figured I could talk about it so it became the first artifact in my personal collection. Next was a carving I picked up in Chichen Itza. It is a common enough trinket but it serves as a reminder of my keen negotiating skills. It also looks cool and I figured I could talk about the trip so it was quickly added to my collection. Then came a chicken toy I don’t even remember purchasing while traveling in Bulgaria on a high school choir field trip. It is the goofiest toy but I thought I would be able to use it as a distraction in class, so I added it to the pile. 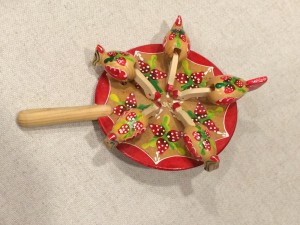 I continued to hunt around asking myself, “What else do I have that is cool?” as this idea of “coolness” was becoming the underlying vision for my collection. To the pile I added a letter opener received as a Christmas gift and finally, I finished off my collection by including a bottle of Bounty Rum from St. Lucia, a reminder of my wedding day when my wedding party (14 of us) drank the resort out of this local favorite. As I rounded out my collection, it became clear that it lacked an overarching theme. I hoped it would be enough and tried to fabricate a connection before the next class.

Letter opener received as a gift

I spent nearly a week trying to find some common thread that would weave these items together to form a personal collection story worthy of an A grade. I failed and as the class went around talking about their very trite but appropriate collections of coins, costume jewelry, dragon figurines, and tiki memorabilia, I sat in my chair and panicked. When it was finally my turn, with as much feigned bravado as I could muster, I pulled out my collection. As expected, the class thought the gas tank and carving were cool; they wanted to drink the bottle of Bounty, and were distracted by the chicken toy. However, my instructor still asked the question “What is this collection?” and I smiled and answered honestly that it was my collection of “super cool stuff”.  All excitement vanished and I was met with several blank stares. We quickly moved on to the next presentation.

Flash forward many years later and now, thanks to Nomenclature 3.0, I can verbalize the make-up of my personal collection; I collect souvenirs! What a simple concept, if only I had understood Nomenclature a little better back then, I could have saved myself the disappointment and blank stares of my classmates and instructor.