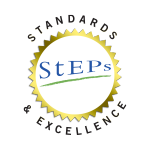 Exciting changes are happening at the more than 1,000 organizations taking part in the StEPs program (Standards and Excellence Program for History Organizations).

Below is another example of how StEPs is helping organizations take a leap forward by improving policies and practices, opening lines of communication, and setting goals for a bright future.

The Jackson County Historical Society formally organized January 19, 1940, when Roger T. Sermon, then mayor of Independence, Missouri, called an organizational meeting to choose officers and prepare by-laws. The headquarters were to be at the County Seat in Independence, and its historical records (now its archives and research library) were then maintained in one fireproof cabinet in the Jackson County Library. The Society ramped up its activity and officially incorporated in 1958 when the oldest structure on Independence Square, the 1859 Jackson County Jail and adjoining Marshal’s Home, was slated for demolition. After a fervent capital campaign under the leadership of Society President W. Howard Adams, the 1859 Jail, Marshal’s Home and Museum opened to the public in June 1959, in the building’s 100th year. The one-room schoolhouse used for ninety years on the William B. Howard farm near Lee’s Summit, Missouri, was also relocated to the site for preservation and interpretation. The restored structures and period rooms were furnished through the acquisition of significant Jackson County-related artifacts from the late nineteenth Century. The society’s archival collection also grew significantly during the surging interest in historic preservation.

Inside the 1859 Jackson County Jail.

In 1972, the society’s Archives and Research Library, which had outgrown temporary quarters in the basement of the Harry S Truman Presidential Museum and Library, relocated to space provided by Jackson County government in the historic courthouse on Independence Square. Today, the Jackson County Historical Society collections continue to grow and we are moving into the twenty-first century with exciting technological projects that will make our collections available to a worldwide audience. In successive years the quantity and quality of the society’s products, services, sites, and programs have adapted to meet the needs of its patrons. Generous benefactors have also helped establish permanent endowment funds for the long-term care of the society’s historic sites and collections. With six paid staff and twenty-five volunteers, JCHS joined AASLH and began the StEPs program in 2018.

Can you describe how your organization is making its way through the program?

We are going through the Basic level indicators by section, meeting the second Monday of every month to complete each section. Updates on our progress go out to the board members each month. StEPs is helping to define the differences between the board of directors’ work and staff work. This is the largest staff size the organization has ever seen, so the board has less daily oversight and has focused on other tangible goals to help our staff succeed.

What would you say is the most significant change or improvement within your organization as a result of taking part in StEPs?

We realized we have a lot of out date policies and procedures. Our organization has grown a lot in the past few years, so StEPs is really helping us navigate the ups and downs of that process.

Which section of the workbook has been your favorite, and why?

Although we’ve only done the Audience and Mission, Vision, and Governance sections at this time, MVG has been my favorite because it is helping our board understand their role.

What advice do you have for organizations just starting in StEPs?

Just pick a time and get started!